What's in my piggy bank?

It is simply ages since I last had time to write a post and almost as long since I last did some sewing. However I'm starting to get excited. I still have marking to do but it will all be finished by the end of this week. So one module with 16 students and the other with 12 students will be done by Tuesday. Then I have a module with 28 students to mark by the end of the week. Then blissfully I will be able to take lots of time out to sew and I've already started organising my projects.

As I have several new projects I want to get started on I need to buy some fabric. A trip to the fabric shop to buy for a new project is always a joy but puts quite a strain on the old purse. However a year ago I signed up to the piggy bank challenge at Val's Quilting Studio and  this last week was the week for counting up what I had saved. 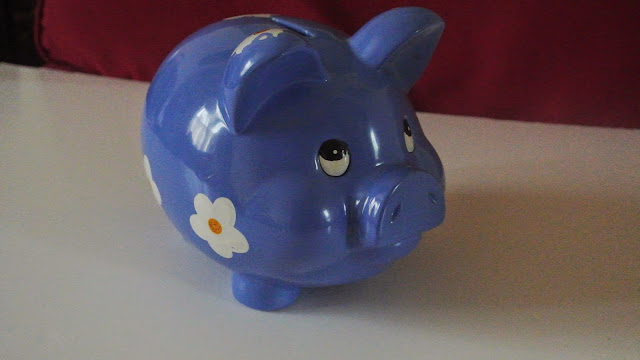 Here's my fat piggy bank that I used this year. I also used a tin to save in because I misplaced my pig earlier this year when we were having work done in the house. I had to go through boxes that were still packed up and enjoyed the feeling of finding treasured possessions. Not only did I find my piggy bank I also found my grandmother's garden hexi quilt flowers. More about that in a minute, first the piggy bank.

Although I hadn't put any money in the pig since January it felt quite heavy and I was amazed to find I had saved £103 plus a few pennies. Since January I had saved £45 in 20 pence pieces and another £10 in small coppers. So the grand total in my savings is £158. That will do very nicely to fund my fabrics for the new projects.

Val is running the Challenge again this year and I'm in. I shall be using the same piggy bank and I shall be starting my saving from 1st August. I'm not starting until then as I am going on holiday the last week of July and will be enjoying ice creams and cream teas and maybe a trip to a fabric shop so there won't be any cash to feed the pig. I wonder if I can save more next year?

I said I'd tell you about the grandmother's garden hexi quilt. I started this for Lucy some time ago. I think it may have been back in 2012 but I'm not sure. I'm working out from the middle flower and I don't sew any flowers on until I have the number needed for that round. I had been working on the indigo round (did I mention I was doing the rounds in the colours of the rainbow?) Anyway once I complete each flower I put it in a box until I have enough for that round. I have been looking for the box since March but couldn't find it but in looking for the piggy bank I found where it had been packed away. So now I can add the next round. In case you are worried my memory is getting a bit ropey (I know I do at times) I must point out that I didn't do the packing. We needed to clear an area in one of the bedrooms so that some work could be done. I wasn't at home so had no idea where anything was packed. 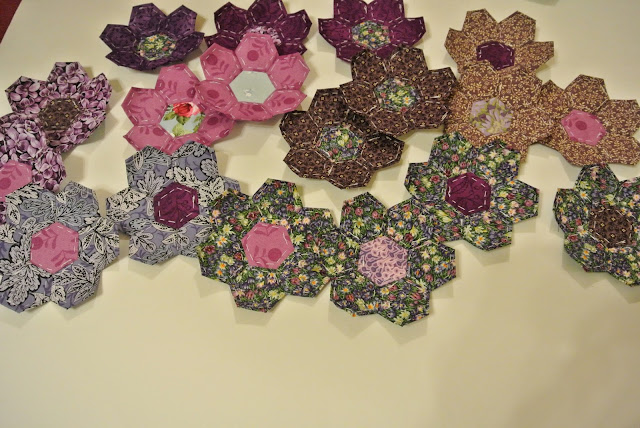 I must remember to post a picture of how far the quilt  has grown. I should have used bigger hexis as they are only 1 inch so it is taking quite a time to complete.

So pop over to Val's Quilting Studio and see how people did with the challenge this year and then maybe decide to join in too. I'm looking forward to picking out my fabrics with it all paid for from my savings this year.

Hope you had a good weekend. I cleared a lot of marking. It meant I didn't get much exercise but the job is almost done. I can then declare the holiday session open and get on with my sewing. This time next week my machine will be purring.