A new cover for my ironing board

For some time now I've been meaning to make a new cover for my ironing board. The old one isn't really that old but it's certainly in bad shape. 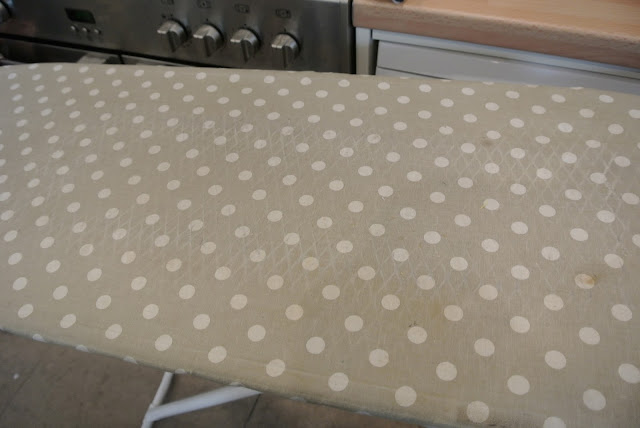 The cover has a foam backing and as you can see the foam has been compressed by use and the metal mesh is showing through. Here's a better view of it. 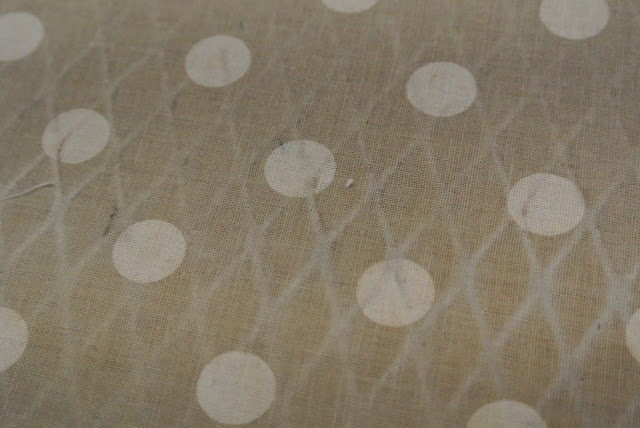 I've been putting on old towel over it because when you iron the mesh pattern shows on the laundry which is very annoying. I knew the cover wouldn't last when I bought it but it was the only one I could get for my size ironing board. When I took the old cover off the reverse side had the metal mesh pattern burnt into it and much of the foam was missing. 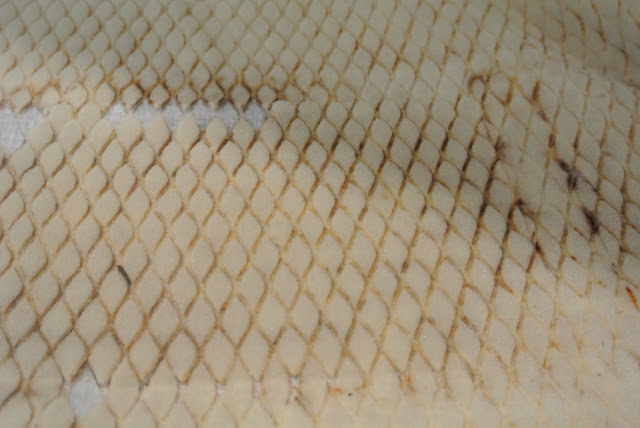 I bought the cover about a year ago and with only three of us living at home there isn't that much ironing - well not as much as when my two daughters lived here as well.

Anyway I hunted through my stash for a suitable piece of fabric and I was going to use layers of wadding as the padding. Then I hunted out a couple of old towels and decided to do a layer of wadding over two layers of toweling. The new cover is nice, soft and well padded so I'm actually looking forward to doing some ironing later. I can't remember what I originally bought this fabric for or even if I had a plan for it, but it looks good on my ironing board. 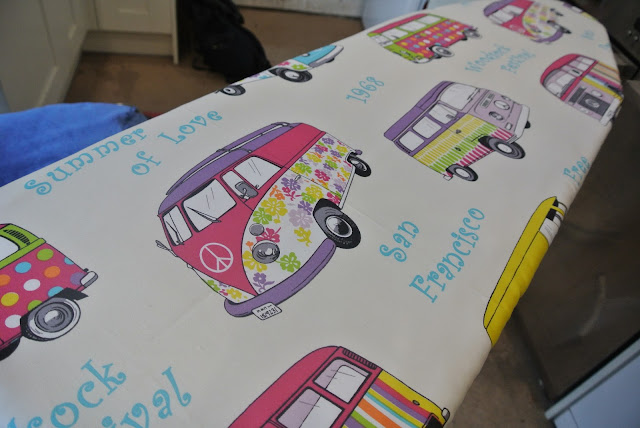 Last night I did a little more work on my 'It's a dogs life' block. I didn't quite finish it as I still had some of the lettering to do. So this morning once I'd finished my cover I sat and stitched the letters. Job done, that block is now finished. 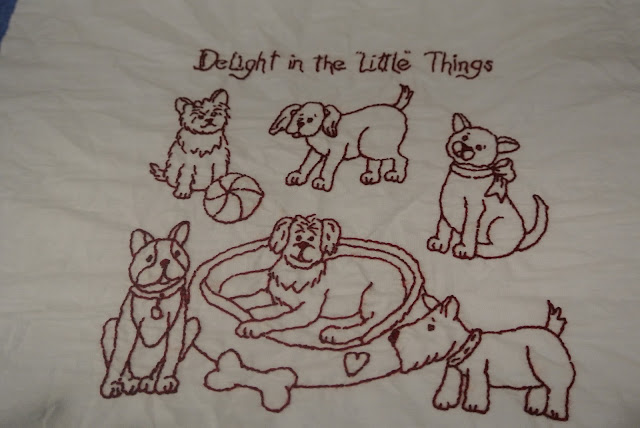 I washed all the fabric solvy out and the block is now drying on a towel. The dark at the bottom left of the picture is my shadow. Having finished this one I set up the new block ready for stitching. 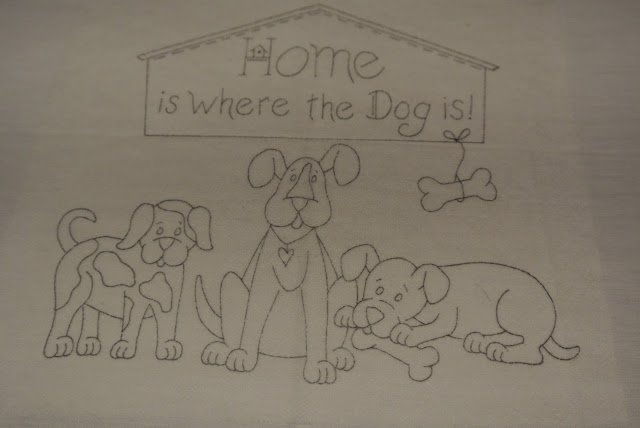 This blocks looks like it will stitch up quite quickly. Then I can start putting the quilt together. I bought this pattern as a kit so I have all the fabric needed to complete it, I just need some wadding. I go through phases with the fabric, sometimes I really like it and at others I hate it so I'm not sure if I will use the kit fabric or mix in some from my stash. I have a little time to make up my mind as I haven't started the last block yet.


A little earlier today I had to take Scamp to the vet. The end of last week he started scratching a lot so Richard gave him a bath. He has his flea treatment applied every month and there is no evidence of fleas. I checked him out for ticks and mites but couldn't find any evidence so hoped the bath would cure the problem. He certainly stopped scratching but started to lick around the top of one of his legs. He stops if you see him doing it and tell him to stop but he has made himself quite sore so a trip to the vet was needed. It seems like an allergy but the sore area now has an infection so he has antibiotics. He is good at taking tablets so he should soon be back to his happy little self.

Now I need to go and cook dinner and maybe later I'll get a chance to do some more sewing.

Email ThisBlogThis!Share to TwitterShare to FacebookShare to Pinterest
Labels: Embroidery

At last a day of being able to sit and do a little stitching. The fault for lack of stitching lies not with too much work but with two relatively small family crises. One is now resolved but the other will take longer. However in between life in general, work etc I can sew again. Yesterday I settled comfortably in my chair with Scamp on my lap and worked on this block for 'It's a dogs life' quilt. 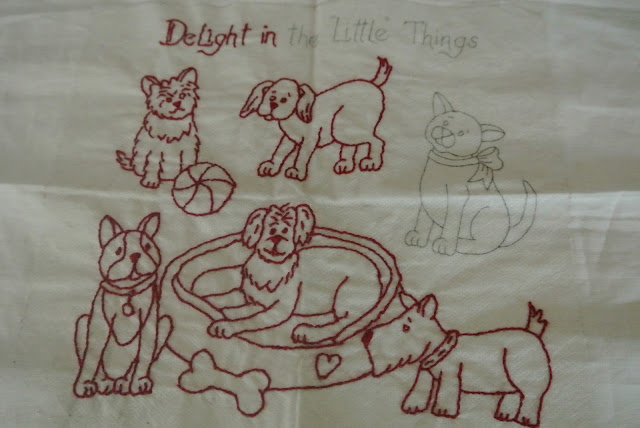 I should be able to finish this tonight. Yesterday was so relaxing and as a result I'm expecting to get a lot more done today. Once this one is finished there is only one more before I need to piece the remaining blocks and stitch it all together. 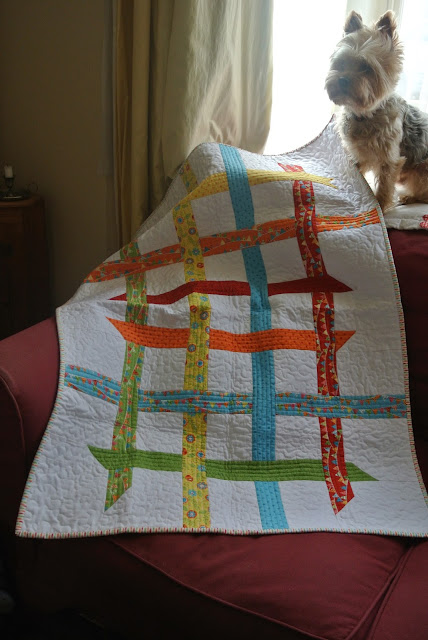 Scamp was under very strict instructions not to sit on the quilt. I chose a stripy fabric for the binding. I used a jelly roll for the ribbons on the quilt and the bindings came from the same roll. I cut the strips in half and alternated the colourways. I love the way it looks. The ribbons were quilted in stripes and the background was a large meander. 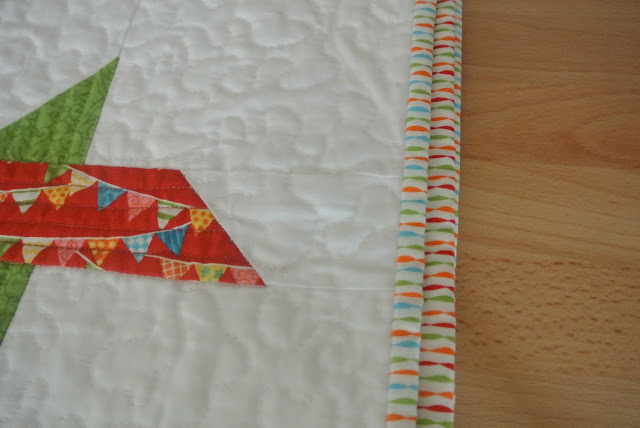 I have some housework to do and teaching preparation but then I have some sewing to do. I have a summer skirt cut out and ready to go. In typical UK style it's raining at present but it is still warm so I'll get a fair amount of wear out of it before the autumn weather really sets in.

A couple of weeks ago John, Tony and I went walking. Every year our church does a walk in support of the Children's Society and we were checking out the route. It was a 10 mile route but I took Scamp with us as he loves long walks so long as he has regular breaks. The route was out in West Sussex so we traveled by train, another favourite adventure for Scamp.

On the walk we went under the Ouse Valley viaduct. This is a fabulous victorian structure that was built in 1841 to carry the London to Brighton railway line over the river ouse. It stand 96 feet high and has 37 arches. 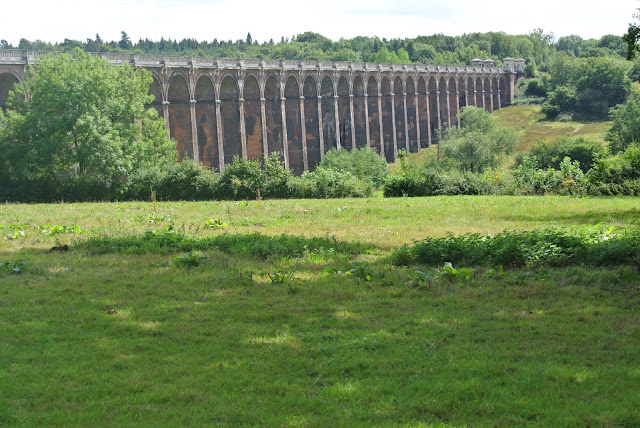 For me the most amazing bit was when we stood underneath the viaduct and looked along its length . Instead of each pillar of the arch being solid, to save bricks it was built like this. 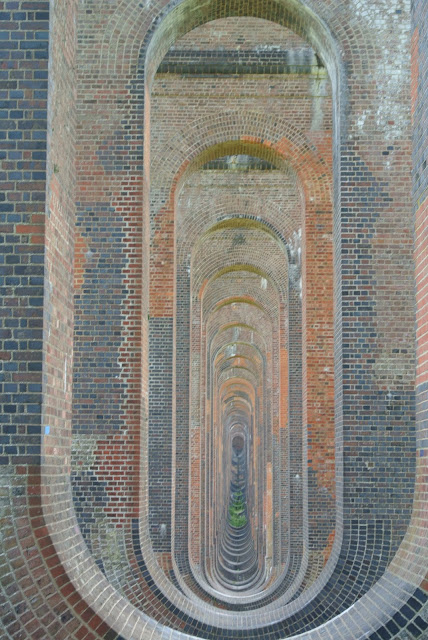 This picture shows the detail at the top of the arches and the balustrades a little clearer. 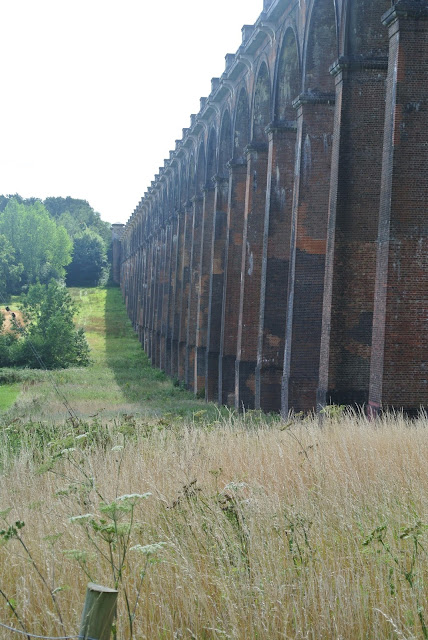 At one point we walked along a path through the middle of a corn field. Now many years ago as a child or teenager (it is that long ago I can't remember) I heard a song from a musical which said 'the corn is as high as an elephant's eye.' I was confused because I'd only seen corn that was shorter than me. Walking through the field with corn on either side of me, that was definitely taller than me I suddenly realised (oh so many years after the event) that what we children had called corn was in fact wheat and the corn referred to in the song was maize or sweetcorn. Der that made the song make more sense. 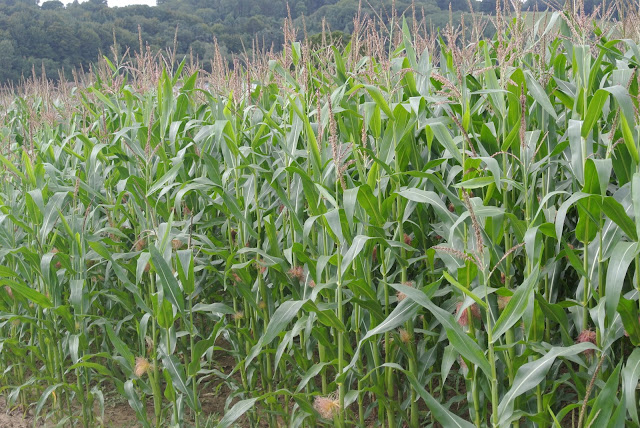 The walk also took us past a reservoir and nature reserve and we ended at a little cafe where we enjoyed homemade scones and cream. Even Scamp was catered for with dog biscuits provided free by the owners. 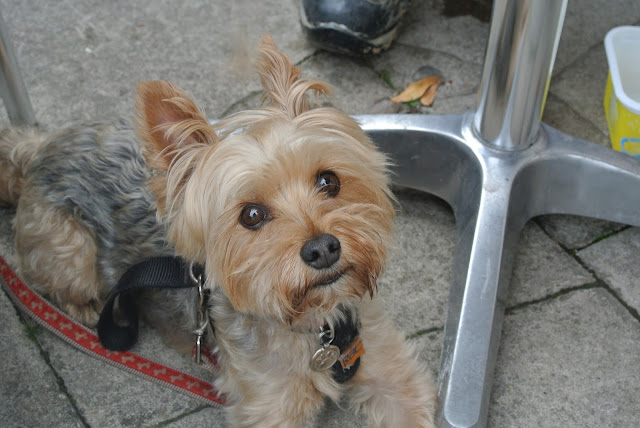 I'm linking this post with Kathy's Slow Sunday Stitching It's very odd coincidence but she's been appliqueing a corn stalk. Go visit and find out what folks have been doing. Have a good day