A little knitting and stitching.

I've been sorting out my projects and trying to make a few decisions.  I needed to do this following my trip to the stitching and knitting exhibition. Whilst I was test driving the sewing machines John sloped off on his own. He wasn't looking for anything in particular but he is often attracted to the wool stands. When I'd finished playing and caught up with John he showed me the pattern he wanted me to knit for him and the wool. I posted this picture to show you the pattern. 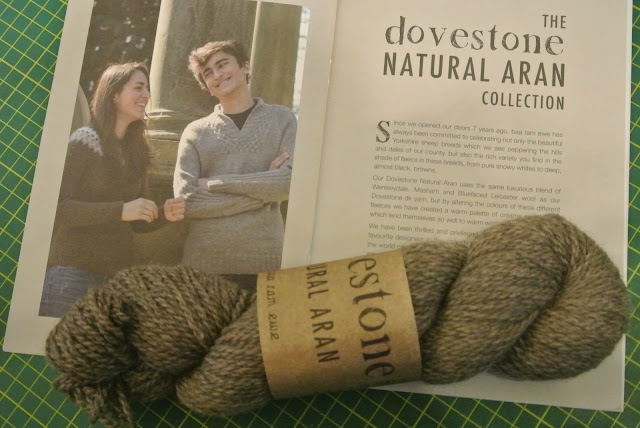 The last time John went with me to the stitching and knitting exhibition he bought some wool and a pattern.The pattern knits up with chevrons bought about by cable stitches. 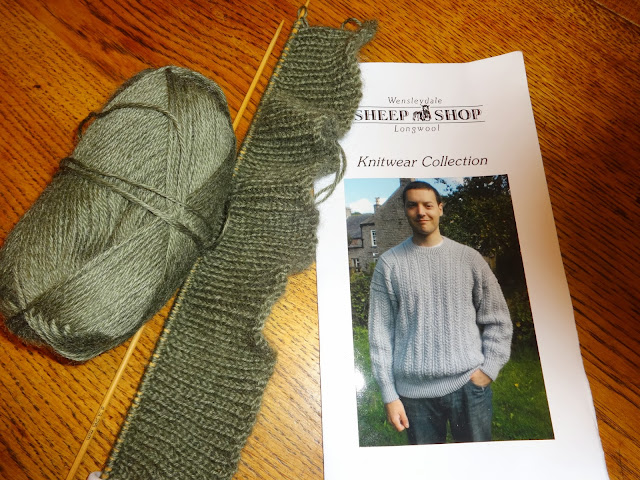 I had knitted the back and up to the armholes on the front but, and it was a big but I hated knitting the pattern. There were only 4 pattern rows but I couldn't always remember which row I'd got to and when I picked it up having not touched it for a day or two it took me ages to work out what I should be doing. As a result this knitting has been languishing in my knitting bag. So last weekend as a first for me I pulled the knitting out! When I started I felt guilty but as I wound the wool into a ball I realised just how much I hated this pattern. I knew it would never be finished but by unpicking it I could use the wool to knit up a different pattern.

My next stop was the internet to look for a plain knit round neck sweater/jumper for a man that would use the same amount of wool and knit up to the correct tension. I found a plain knit Guernsey sweater and I made a start on the back. I need to knit 16 1/2 inches up to the armholes and so far over the last 4 days I've knitted 13 inches. The wool has an interesting kink in it having been knitted up before but that will come out when it is washed. 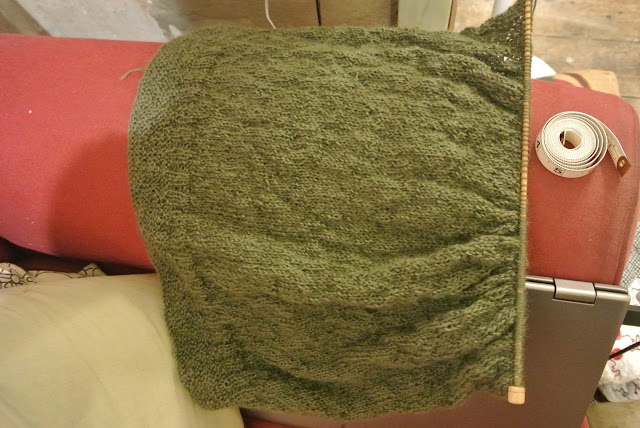 Next I went through some of my small cross stitch kits and decided to donate some to the charity shop. There is no way I will ever get round to stitching them and I don't even like some of them. I was given several of the kits and they really weren't to my taste but I felt I had to keep them and make them up since they were gifts. John persuaded me that I could do what I liked with the kits since they belonged to me. Donating the kits gives me some space in my stitching drawers.

Today John, Lucy and I were joined by our friend Tony for a walk. Lucy wants to walk more and wanted to walk the capital ring. The rest of us have already completed it. John has walked it 3 times and Tony twice whilst I have walked it once. The capital ring forms an inner ring around London for walkers which in total is 78 miles long. Today we walked from Balham to Richmond. The weather was quite cool and misty which is OK for walking.

The first part of the walk follows our usual dog walking route up to and through Wandsworth Common. Finally the leaves are changing colour 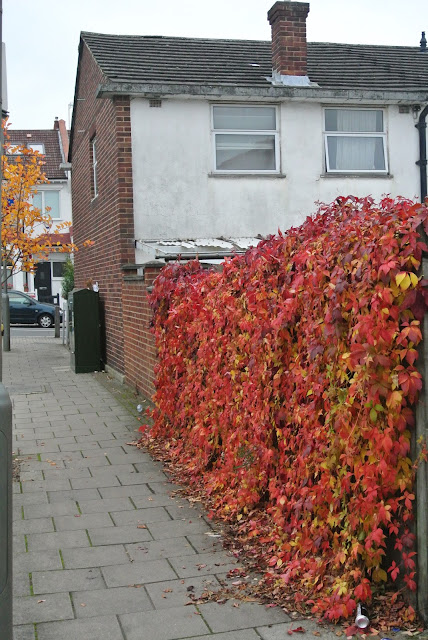 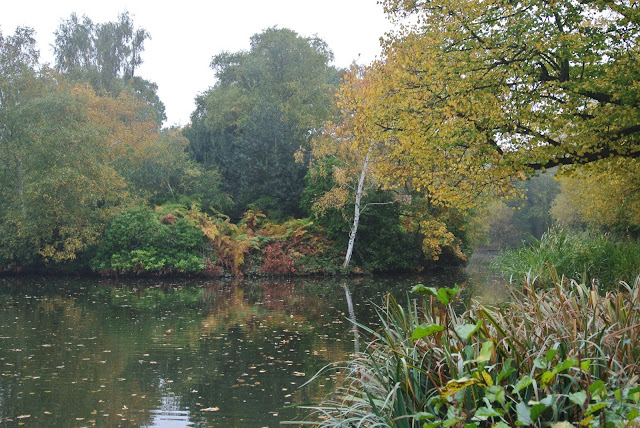 The route took us through Wandsworth Common, Wimbledon Park, Wimbledon Common , Putney Heath and Richmond Park. There was some road walking but not very much. Whilst completing one of the road sections we can across this little fella and some of his friends on the railing. I couldn't find out why they had been added but they are cute. 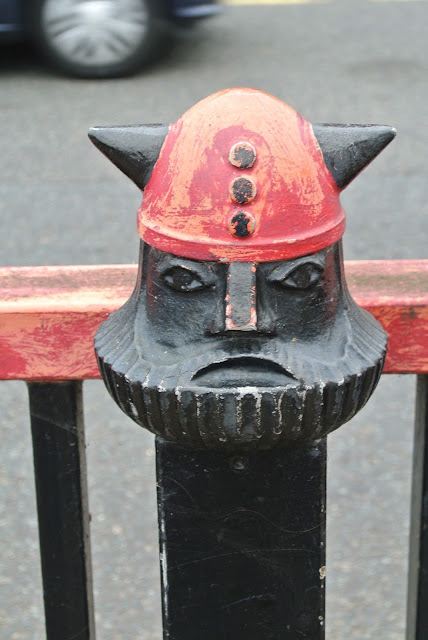 As we headed along the road to Wimbledon Common we passed Queensmere House, which has now been converted into luxury apartments. Formally it was a college and was used as a prisoner of war camp for officers during World War 2 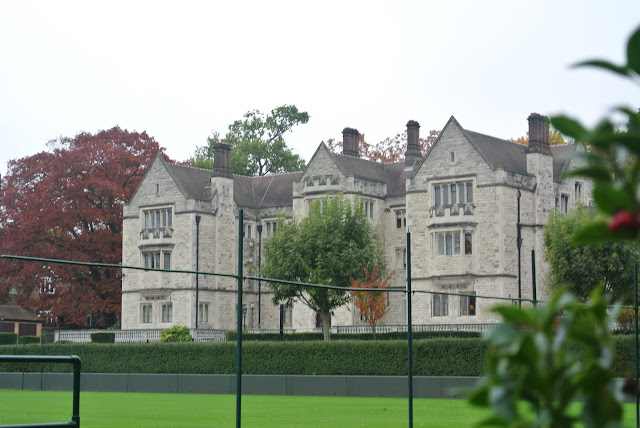 On Pen Ponds in Richmond Common we saw this heron. It took off as I was taking the photo but I like the picture I'd ended up with. 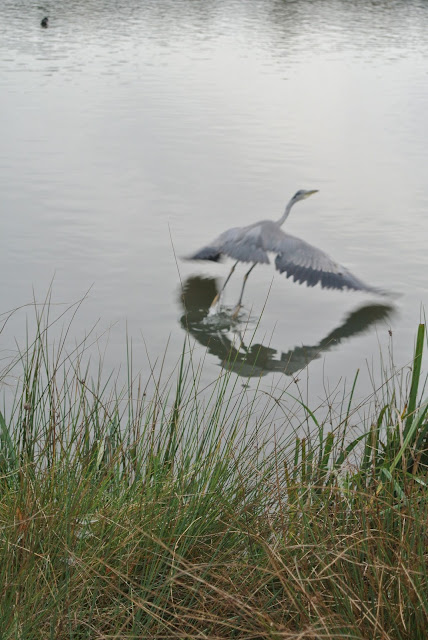 A little further on we saw this tree that has been struck by lightening in the past and now only has leaves on one side. 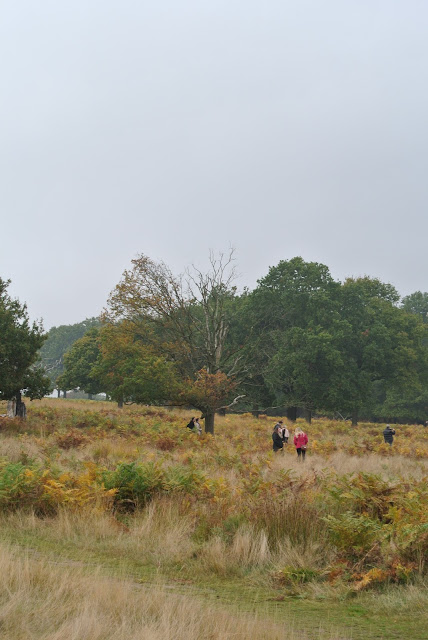 This ancient oak is hollow and has been fenced off to stop people climbing on it and potentially being injured .


The view from the top of the hill in Richmond Common is beautiful but by the afternoon the mist still hadn't cleared . 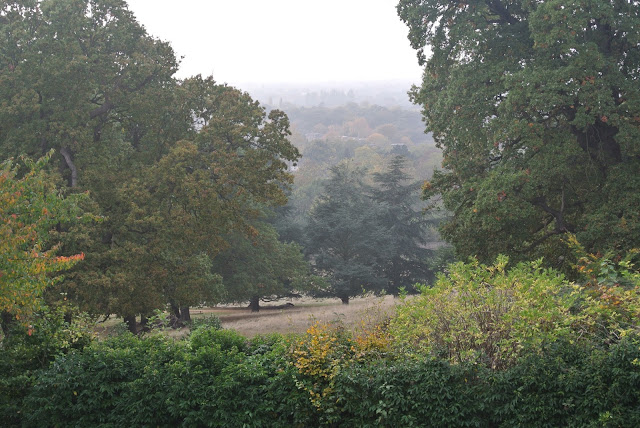 We covered over 10 miles on the walk so this evening I am really looking forward to some slow stitching whilst chilling out with a good film. I have now reached the armholes on my knitting and in total I only have 6 more inches of the back to knit. Because the pattern is just knit a row purl a row it is relaxing to work on. Before I do that I have one last side of binding to hand stitch down on my nine patch quilt. That means that finally I will have a finish. 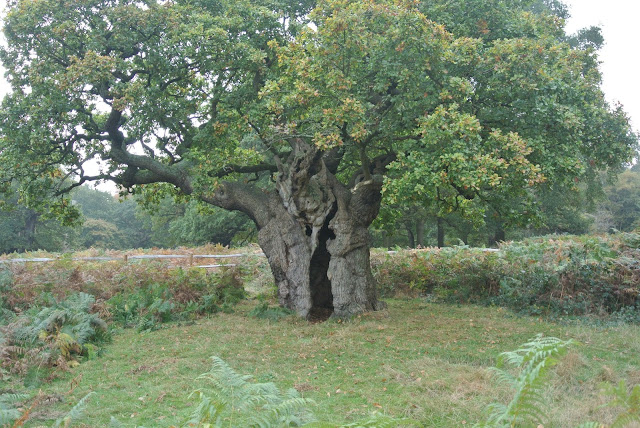 Although tomorrow is Monday  I'm not in work and I've got some time to play with my new machine. I promised I'd tell you about it and tomorrow there is time to do that. For now I have about half an hour to popover to Kathy's Quilts for her Slow Stitching Sunday linky party to see what everyone has been busy doing. Why not visit and find out?

Lyndsey
Posted by Lyndsey at 20:54