Wednesdays are always rather manic. To start with I run Rainbows, Brownies and Guides on Wednesdays. We start at 5pm and finish Guides at 9 but often it takes another half an hour to get completely tidied up. Generally I don't work on Wednesday as I need to get the activities for the girls organised but when I have a lot of marking to get done I try to do some of it in the morning. This morning was no exception and I spent some time marking. By 11am I decided I needed a little time to myself so I set the machine up and pulled up The Splendid Sampler on my computer. This is a sew along that started earlier this month. The blocks will finish at 6 inches and there are 100 blocks with a block being released on a Thursday and one on a Sunday. Three blocks plus a bonus block have already been released.

I meant to start these blocks on the day they were released but........ well you know what its like. Anyway I decided I would try and make the first three today, after all they're only 6 inch blocks so how long would that take? Block 1  is Hearts a flutter by Pat Sloan. This is a nice straightforward block that looks very effective. It went together very quickly and I'm very pleased with the result. 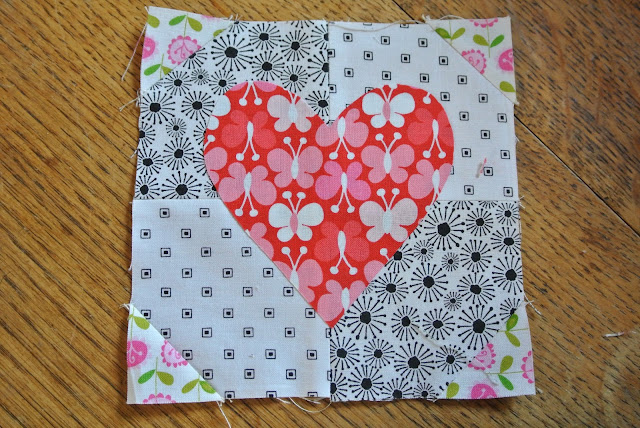 I still need to stitch the heart down. I was going to machine stitch it but I have decided to do it by hand. I also need to trim the block.

Whilst on the heart theme I decided to make block 3. This block is called Lots of love and is designed by Melissa Corry from Happy Quilting  I realised this block would take a little longer to make but I thought it would be reasonably quick. For some reason I seemed to find it impossible to stitch this block correctly. I had to unpick several seams and some of them several times. It took a long time to get it right but I'm now happy with it and it is a lovely block. The instructions are well written and the pictures are really helpful, it was just one of those days. Anyway I finally managed to sort it. 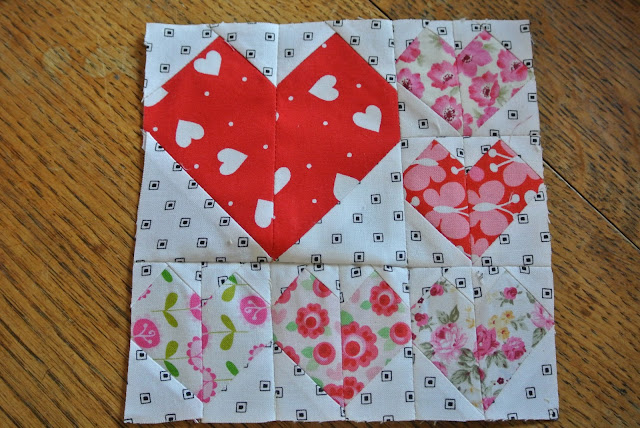 With hindsight I wished I'd made the three lower hearts  a stronger colour so there was greater contrast. By the time I had finished this block I didn't have time to make block 2 so that will be a little job for tomorrow or Friday.

Having struggled to get that block right I had time to finalise the activities for the meeting. Rainbows and Guides was all planned but for Brownies, one of the activities was making Danish Hearts They make a little basket and next week we will be making biscuits to give as a present in the basket. Several of the girls said they'd made them before at school and rushed to get them done but were disappointed when the couldn't open them as a basket. By the end of the evening they had all managed to make their basket and they are excited to be making biscuits next week. I forgot to take a photo of the hearts so here is one from Google.

Tomorrow I'm at work again and teaching all day but I'm looking forward to relaxing with some stitching.

Lyndsey
Posted by Lyndsey at 00:21