A great day sewing and a party

Saturday was my idea of a perfect day. I spent the day sewing but along the way I got a lot of household chores done including attacking the ironing mountain and then in the evening we went to our friend's birthday party. Agnes was celebrating her 60 birthday.

When I woke up I had a few aches and pains from the drug but nothing that some Paracetamol couldn't deal with so by 9:30 I had my cutting board set up and a new blade in my rotary cutter and I made a start on trimming the star blocks. Having remembered where my square ruler was made this process much easier. You just have to love all the rulers that make life so much easier for quilters. I really think I need to invest in some more.

Trimming done the next stage was to decide how to arrange the star blocks for the four sides. Even this took much less time than I had anticipated so I set up my machine and was soon stitching the stars together. I did the borders one at a time so I could check that I was completely happy with how they looked. I had to unpick 4 seams and 2 of them twice as I had stitched over the points. In the end I was happy with nearly all of them and will trust the quilting to sort out the couple that I just couldn't get right. As I pressed the seams I played my game of ironing so many items for so many seams and once again I ended up with my star borders ready to attach to the middle part of the quilt and a neat pile of ironing. In between sewing I did several other jobs including making celeriac and mature cheddar soup for lunch. You can find the recipe here

In the afternoon I added both the star border, (border 2) and the narrow green border (border 3).  It was difficult to get a good photo. As you can see this is going to be a big quilt. I can't remember its completed size but I still have 2 more borders to add. 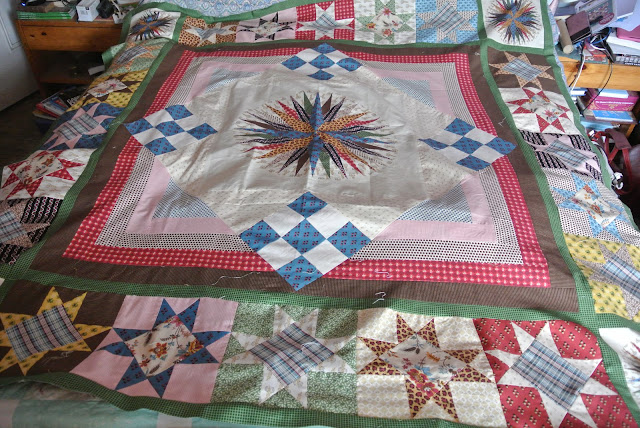 I was happy with how the star points looked. They all matched pretty well where they had been joined together to form the border and when I joined then into the quilt. 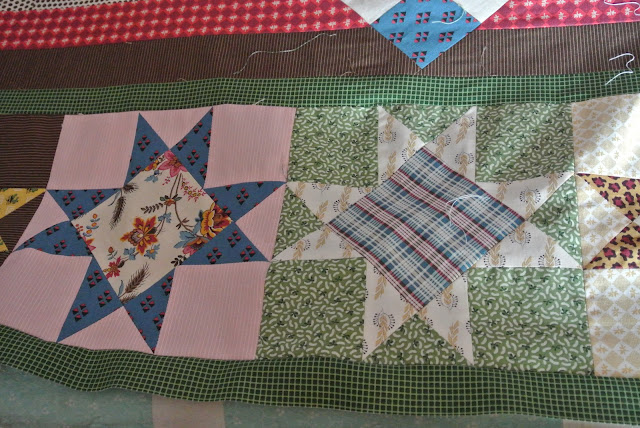 The fabric is a terror for shedding threads so I've got a lot of loose threads to remove at some point. The green fabric used for the outside border isn't so bad. When I saw this pattern in Today's Quilter I liked the fabrics but wasn't completely sure. In person I really like the way they look.

I had hoped to make a start on stitching Beulah but as I sew on the dining table I have to tidy everything away and then I needed to prepare food for Richard. By then it was time to get ready to go to Agnes' party so no hand stitching got done yesterday.

The party was to celebrate Agnes' 60 birthday and it was themed around rock and roll. There was also a sit down dinner. The party was in our church hall and as is often the case with churches there were a lot more women present than men. 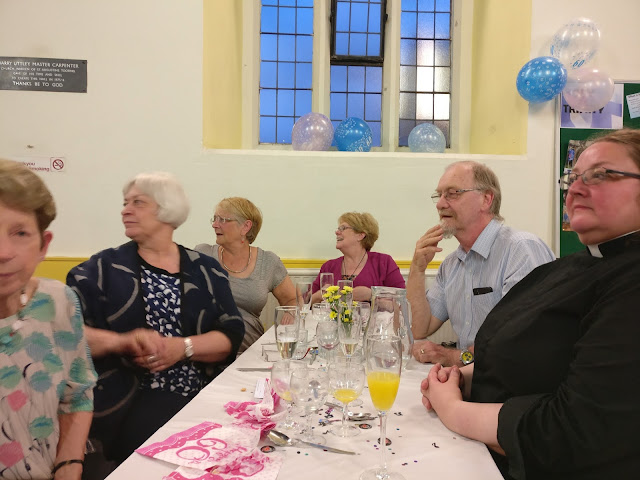 I forgot to take my camera but did have my phone. Unfortunately I couldn't take many photos as it didn't have a lot of battery. I only usually need to charge it every two days and tend to forget to check if I'll have enough power to take photos. Never mind I had enough power to take a photo of Agnes with her cake. 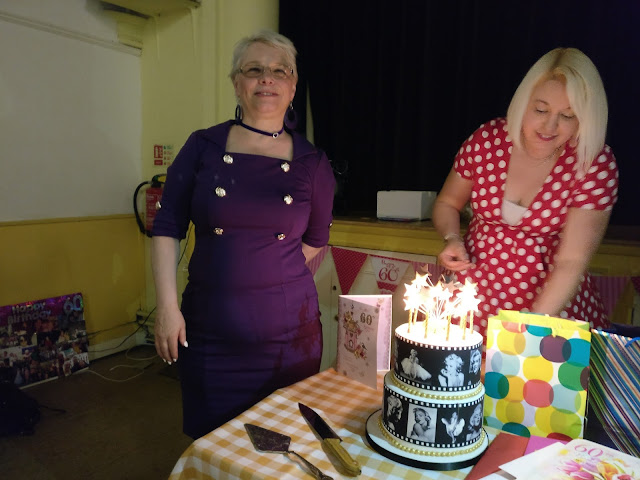 The cake was beautifully decorated and tasted fabulous. The food was very tasty - curry mmm my favourite, the company was great and the music all from my teenage and early adult era. A good time was had by all. I remembered to check with my oncologist if it was OK to drink with this new drug and the answer was yes so I enjoyed a glass of Processco to toast Agnes.

This morning I'm about to take Scamp for a walk and when I get back I must do some marking but later today I have earmarked for my hand stitching time.

Lyndsey
Posted by Lyndsey at 11:22