On Friday night John and I did our packing for the weekend, not that there was a lot of personal items to pack as we were only staying one night but there were a lot of other things. We were heading up to a marina near Leicester where my younger brother lives on his canal boat, Water Pixie. He didn't name the boat as this was chosen by the previous owner but he likes it and is planning on painting a water pixie on the bow. That will happen in the summer and once he's decided what a water pixie should look like.

The boat is moored in a marina on the river Soar. We arrived well before lunch even though I had delayed getting out of bed as I was so comfortable and wanted to savour my morning cup of tea. The journey wasn't bad as it was light and there was no rain. We got held up by road works but that's an everyday problem.

I remembered to take my camera with me and later in the evening I remembered to take some pictures although I forgot to get a photo of the boat itself. I think he said it was a 54  foot boat but it could be a little longer. I took this picture from the boat's Facebook page

At the back of the boat i.e. the end with the tiller the first area is the kitchen. I took a quick photo of Alex as he made some coffee 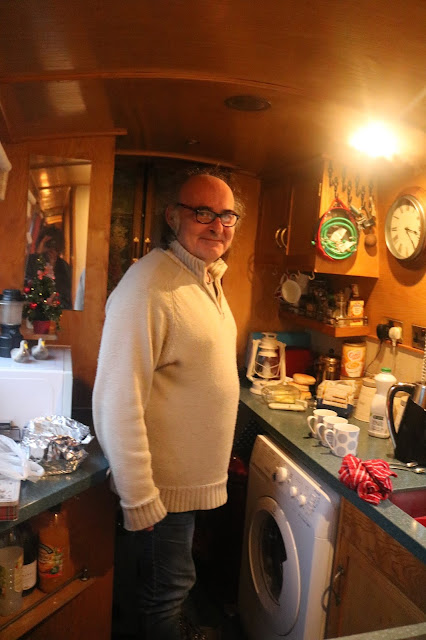 Then there's a narrow corridor past some cupboards, bedroom and the bathroom. 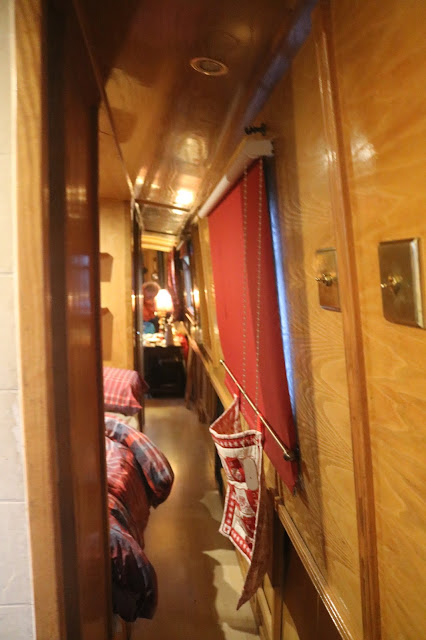 The bed is very comfy but quite high off the floor. He has a TV here but uses it to play videos whilst snuggled in bed before settling to sleep. There's also lots of handy shelves at both ends of the bed for books and clocks etc. His boat has one porthole which is here in the bedroom. Instead of a curtain he has a 'porthole cushion' for use at night. 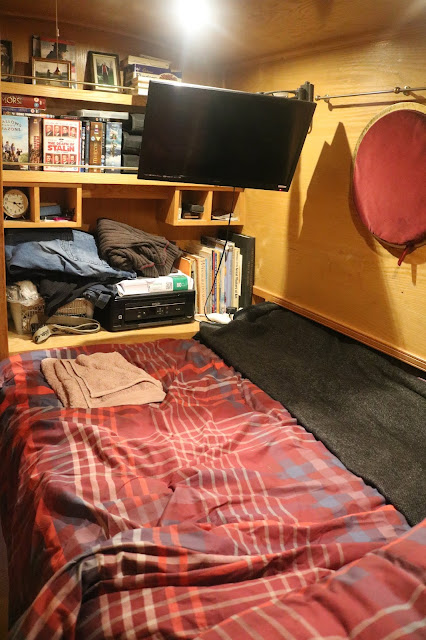 I didn't photograph the bathroom but he had a bath with a shower over it, washbasin and of course a toilet.  The main living area is at the front of the boat. It was neat and tidy until we arrived and dumped our things. 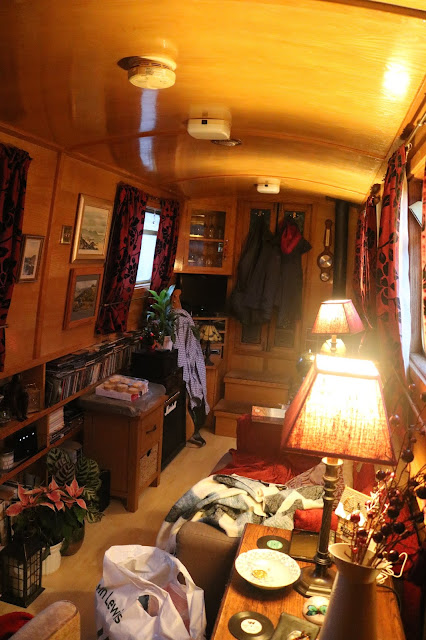 The boat has central heating but in the corner it also has a fire which was very efficient and heated the room really well. 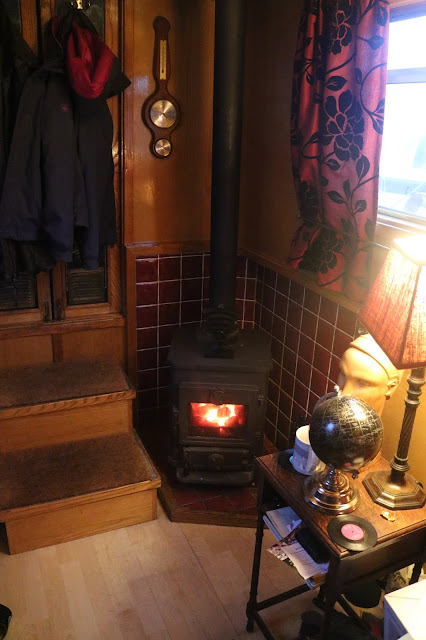 Looking back the other way he has more storage space on the wall between the main room and the bathroom. Under the windows on the right hand side were book shelves. 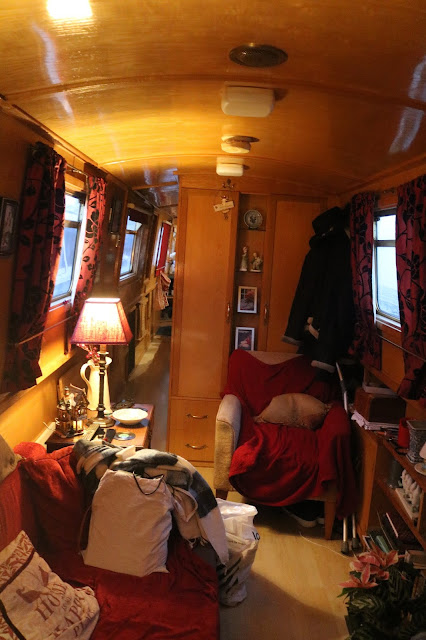 He was starting to decorate for Christmas and I loved this light. 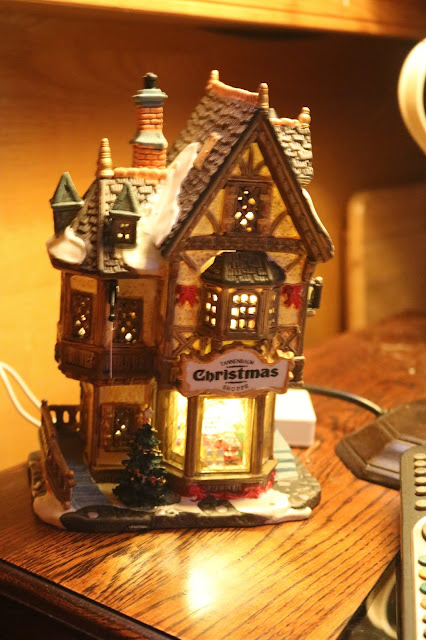 We had a great weekend and I was able to show Alex his quilt. The scrappy quilt I am hoping to finish this month is for him and although there is still quite a bit to do on it I decided to take it with me to show him. He was very pleased with it and we arranged another trip early in the new year, weather permitting, so I can give it to him. The pillow was for his friend Jacqui and she was really happy with it especially as the colour suited her living room very well. I've been looking after two of Alex's guitars, one being a large twelve string. I'm not sure where he will store them on the boat but he was very happy to be reunited with them

The journey home from Alex's was good until we reached London when it began to rain heavily. It made the last part of the journey rather tiring and once home I didn't have the energy to do anything. That rain has set the pattern for the week and again today I found myself driving through heavy rain.


I always make a Christmas cake and this year I cut it into pieces, first in half and the I cut one half in half again. The half cake we have kept for ourselves. I usually make some special decorations out of sugar paste but this year I just didn't have the time so I bought a pack of these little decorations. On the other two pieces I used the holly leaves which left the puddings for my cake. I gave one quarter to Alex and one to Katy. I know Alex liked his as he's nearly finished it. I'll find out what Katy thought this weekend. I haven't finished the edging on my piece of cake so I'll do that later this week and it will be ready to share with friends this weekend . 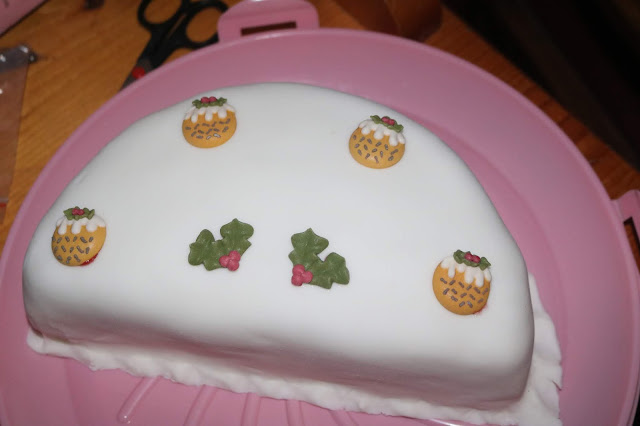 When John and I went to the Stitching and Knitting exhibition In October I saw an embroidery kit I really liked but it was quite large. John said he'd buy it for my birthday but I opted for this small piece. If I enjoy making this I will get the larger piece. The kit has all the threads and fabric you need. The poppies are made using red silk. The piece is small at just a little short of 4 inches by 4 inches and I can't wait to get started on it. 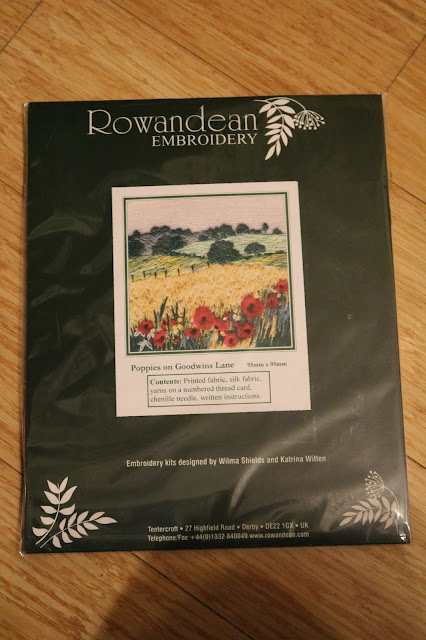 This week I received my subscription box for the month. I love the fabrics in this months box. Having made the Dresden plate cushion for Jacqui I want to make one for myself using this red fabric. I love the coaster that was included in the box and the pack of tissues for dressmakers or stitchers but the best bit is the 15% off voucher for use in January 2019. Not that I need anymore fabric but since when did you have to need fabric? 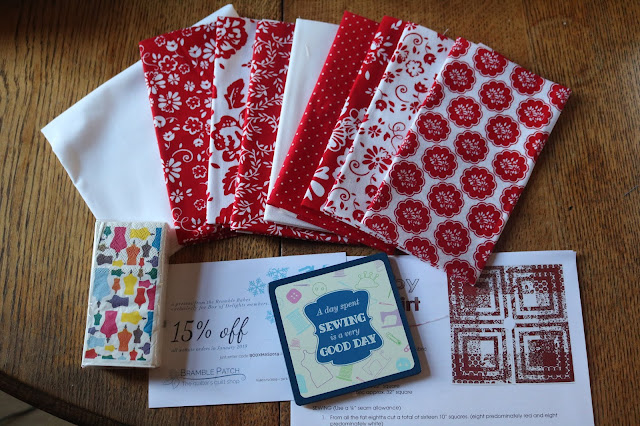 Last night John and I went to our local pub as they had the London Welsh male voice choir there to start the build up to Christmas with some Christmas carols and songs. They were very good and we all joined in. It was great fun and the perfect way to get ready for Christmas

I have two more days to work until I'm on holiday for two weeks. I have lots of sewing to do over the two weeks and I can't wait.

I hope you Christmas preparations are going well. I still have a lot of grocery shopping to do but it will all get done in time. I also need a couple of presents and then I'll be ready.

Lyndsey
Posted by Lyndsey at 22:14