A visit to Avebury.


Last weekend as you know was my birthday and we went away. I told you about our trip to Midsomer quilting and showed you some of the mini quilts but what I didn't show you were two of London.


The two quilts were by Stephanie Crawford. The first one  "And then three come along at once . . ."  was selected for the SAQA exhibition ‘Made in Europe’ that, in 2017, travelled to various venues in the US. 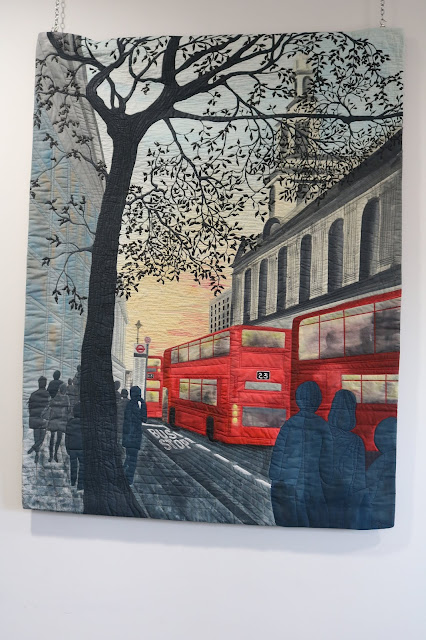 The second one, also by Stephanie is titled 'Protest outside the Royal Courts of Justice ' 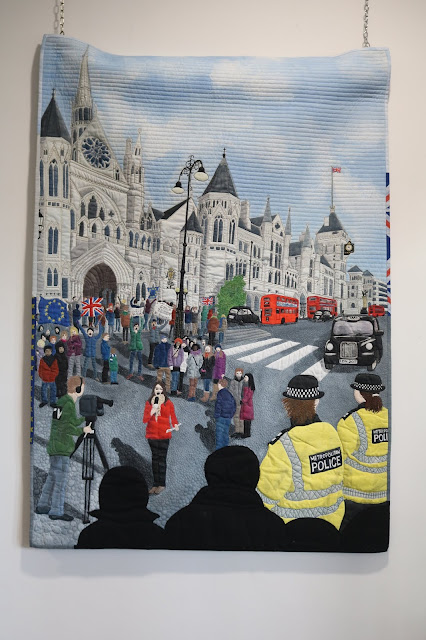 Both quilts were amazing. If you want to see more of her work go to her website HERE

On the Sunday we visited Avebury Rings. Avebury is one of the main ceremonial sites of Neolithic Britain and is also one of the largest.  It was built and changed from about 2850 BC until about 2200 BC. When we arrived it was cold and windy but we decided we would walk around the whole site. Unlike Stonehenge there is more than one circle and many of the stones are smaller. 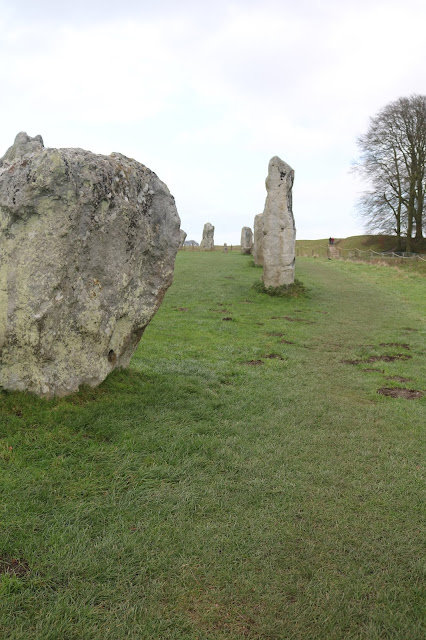 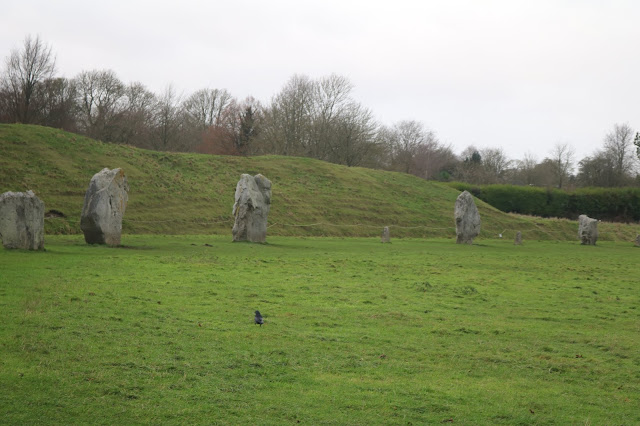 It is made with a steep sided ditch around it. You can see the bank in the picture above  and we walked round the path on the top of the bank. 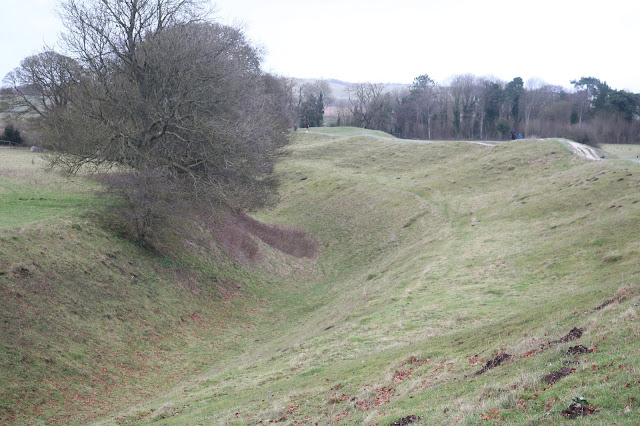 Also unlike Stonehenge you can walk among the stones, touch them and lean on them to have your photo taken. 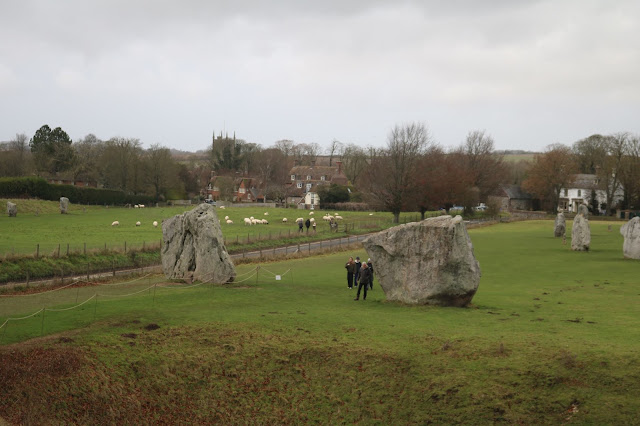 Leading from the rings there is a stone avenue that goes towards a long barrow at West Kennett. We took a walk along it. Many of the stones have been moved and concrete markers placed to show where they should be. 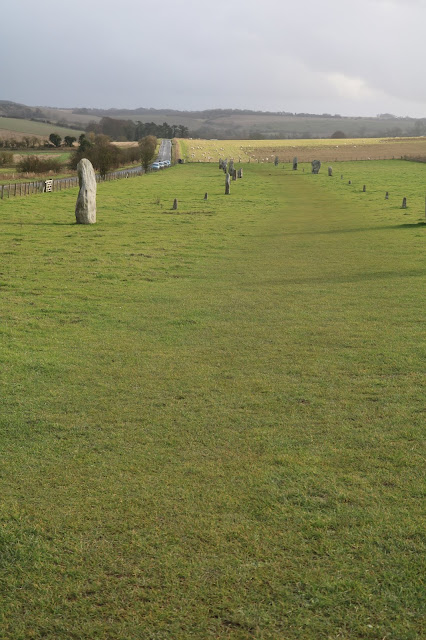 I enjoyed seeing shapes in the stones. This one I thought looked like a dog 's head and his paw coming down. 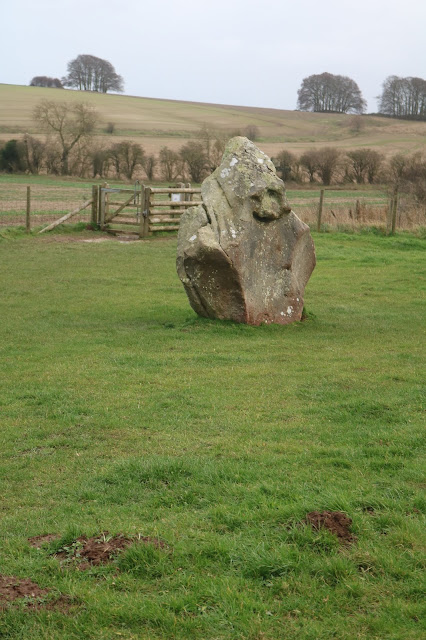 This one I thought was like a large stone person kneeling in front of the tree. 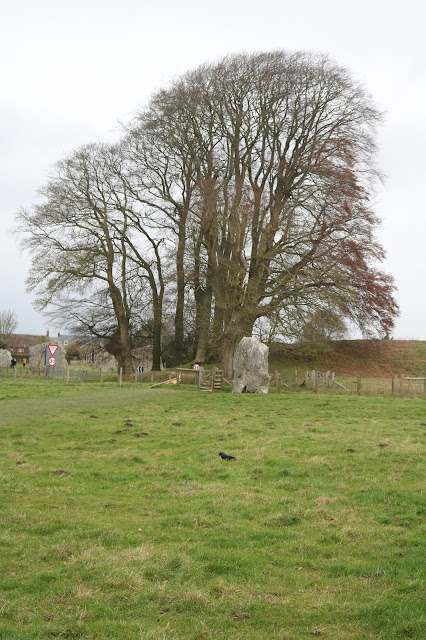 We had a good walk around the stones finishing just as it started to rain. We enjoyed a cup of tea and a cake in the cafe and I also visited the shop where I found some little gits for Christmas stockings. After that we decided to head for home whilst it was still light. As we left the area I spotted a conical shaped hill and we realised it was part of the neolithic earthworks so we had to stop and find out more. 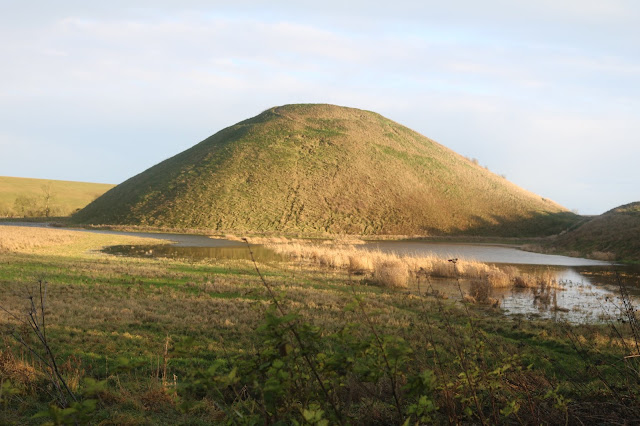 The hill is Silbury hill and you can find more information about it HERE There have been three excavations of the hill but all failed to find burials, however they caused holes to appear in the hill because they weren't properly filled in afterwards. Because of that and erosion you are no longer able to walk up the hill. It would have been impossible due to the amount of rain that had fallen and made a moat around it.

Leaving the hill behind we drove back to London. We ignored the motorway and enjoyed the journey through the villages along the A4.

Before I go just a quick reminder that there is a give away to celebrate my birthday. You'll find it HERE

Lyndsey
Posted by Lyndsey at 22:47