The final day of 2019 and we had plans to meet up with Katy and visit a gallery or go for a walk. In order to fit in a little me time and to re baste the Christmas quilt I got up early, cleared the dinning table of its runner and flower arrangement and set to work. I basted this quilt before Christmas but found I had a large wrinkle in the back. There wasn't time to sort it out before Christmas so I put it away. Since then I've been planning on getting it done and John was going to help me but there was always something else going on or things to do. This morning saw that quilt basted to within an inch of its life and no wrinkles in sight. Now I will be able to start my quilting. I want to get this finished in January and I can't come up with any reason why I can't fit it in.  Picasso thought he was helping and really didn't like it when I put him out of the room and firmly shut the door. With his help I'd have had even bigger wrinkles than I had before. 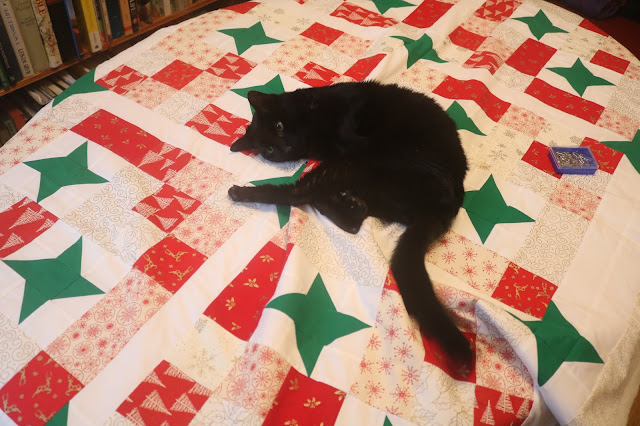 Once the basting was done and dusted I decided to attack my scrap boxes. I have 3 boxes and they are all stuffed full with one of them having a pile on top as well. 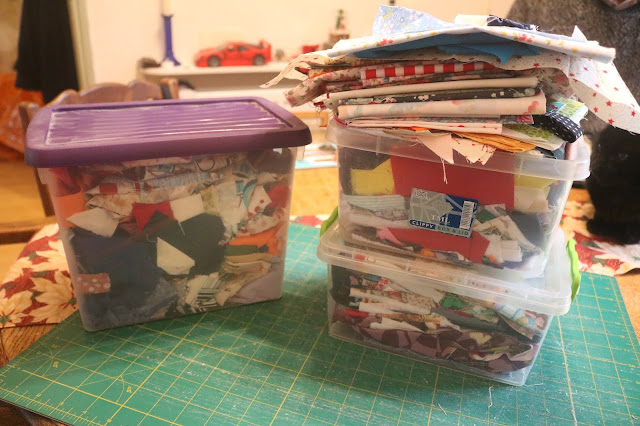 I set up the ironing board by the table so I didn't have to keep walking to the kitchen. I spent quite a time ironing and cutting. There were also a few big pieces of fabric which I just ironed and folded. I've no idea how long I was trying to tame the scraps but by the end I had several piles ready to go into the appropriate boxes and drawers. 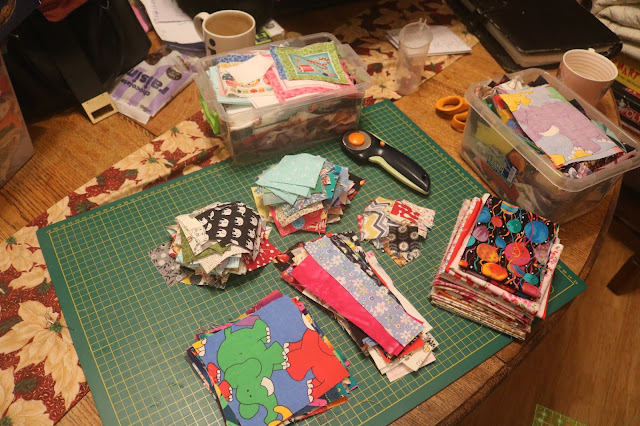 It's just a shame that I don't appear to have made much of a dent in the scrap boxes. Having done some laundry today I have ironing to do tomorrow. Whilst doing that I'll iron some more scraps and spend a little time cutting them up. Over time I should be able to get them sorted and ready for use in future projects. Whilst sorting the scraps I found some blue fabric which will work well in my project for the Winter Blues blog hop that is taking place at the end of January.

A few months back Richard asked me if I'd make him another quilt. I'd made him a Star Trek quilt a few years back and it gets a lot of use, he even takes it on holiday when we go, using it in the back of the car so Scamp settles and often as a picnic blanket when we are out and about. 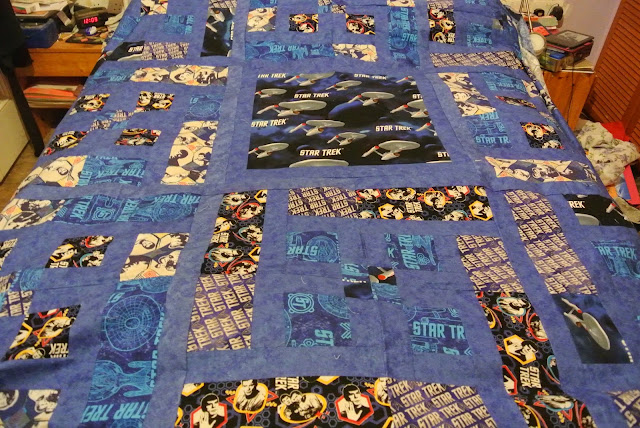 I asked Richard to come up with the design he wanted. I guessed it would probably be based on a computer game or something similar. The new quilt he wants has the flower from the Mario games on it. I spent some time this evening working out how much fabric I needed of each colour. The quilt will finish at 80 by 80 inches.This size I can manage quite well on my machine and on the table I use. John and I have an over night adventure booked for the end of this week and it will involve a visit to a quilt shop where I'm hoping to be able to get the fabric I need so I can get started on the quilt.

John and I have also been doing some planning. Lucy started it all by deciding to complete 30 things before she's 30. Her idea is to start on her 29th birthday in April and complete the challenges before she turns 30. We decided we'd try to complete 70  things before we're 70. John will be 68 in March and I was 66 earlier in December.  We both have our own lists but there will be a lot of things that will be on both of our lists. I obviously have more time to complete my list but having had cancer back in 2017 I know life can throw curved balls when you least expect it. This isn't a bucket list as I've always believed if you want to do something that you should just get on with it. I've never put things off until the children are older or until I retire but it is giving us the opportunity to really think about what we would like to do.

Yesterday evening I spent some time working on Earlene, one of the bag ladies. This is how far I'd got when I last worked on her. I hope to have her finished tonight or tomorrow. We aren't going partying to celebrate the New Year. I'm cooking a Chinese meal and we'll watch some television. Tomorrow we plan on going for a walk but I've also factored in some sewing time. I'm going to try and achieve a minimum of 15 minutes sewing each day. I'll let you know how I get on.

Lyndsey
Posted by Lyndsey at 23:01