A Great way to start the week

Starting the week with a bank holiday is always a win win. No having to get up early to start the working week and time to do my own thing. I had a few chores to do but I had sewing in mind and finishing a project.

I started my tuffet at some point  during autumn last year. I had bought it earlier in the year but it took a bit of time to get my nerve together to start it. Several people I knew who had bought one told me it was very difficult and they had assigned their's to a cupboard.  Before I started working on it I went through the instructions very carefully, making sure I understood them. Making the pieced top took some time as I didn't want to make any mistakes. Eventually it was all done. I then put the tuffet to one side as I had some other projects to work on. Before I could complete the tuffet I had to order some long upholstery needles and also some staples for the staple gun.

Today was the day for putting this project to bed. I needed to attach the large button to the top. This is where the long upholstery needles came into use. Cords were attached to the back of the button. The long needle was then feed up through the foam from the base, cords threaded through the eye of the needle and pulled out to the base. The cords then had to be pulled up tightly and at this point I needed help from John. Lucy also joined in and helped John staple the pieced cover to the base and also the covering fabric for the base. I attached the legs by screwing them into base and the job was finished. 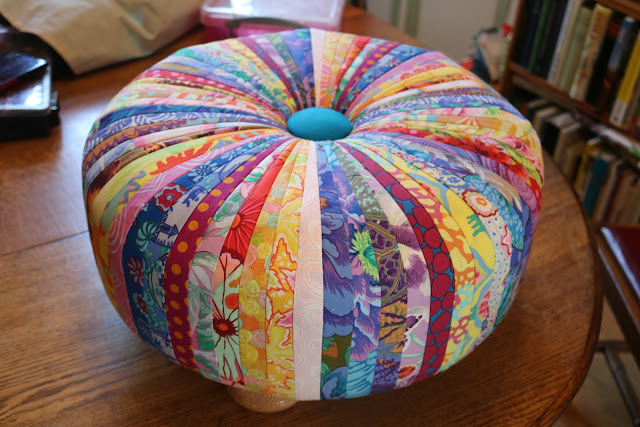 I love the little feet on the tuffet 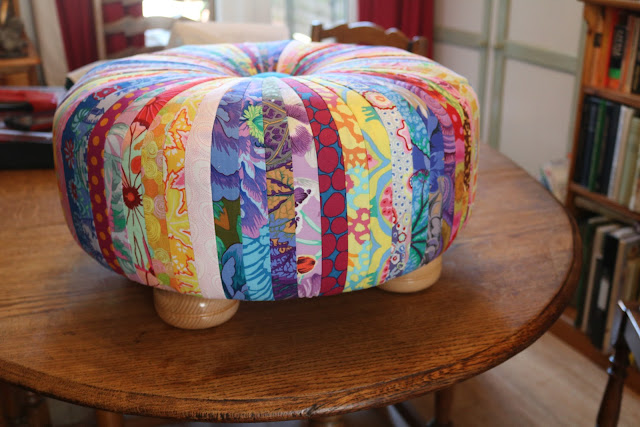 Scamp thinks the tuffet is for him to sit on. It seems to be just the right size. 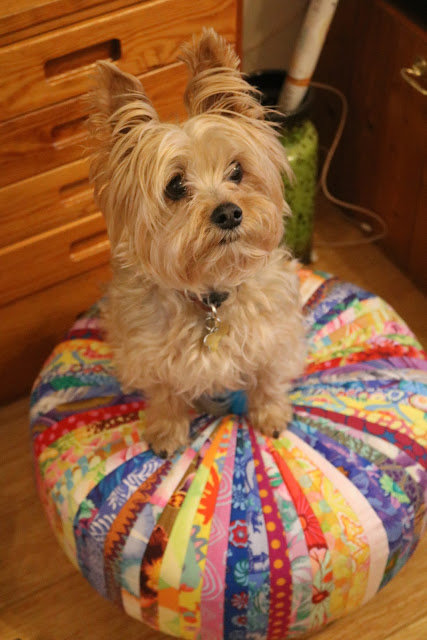 Scamp was due to have his visit to the groomers when we went into lock down. Unfortunately his appointment was cancelled and now he has long fur and is rather hot. We have trimmed round his eyes so he can see but he wriggles a lot so the rest will have to wait until the groomer reopens.

I spent a little time this afternoon crocheting a couple more granny squares. I now have 111 squares which means I have less than 300 to make. These are easy to make and I don't really have to concentrate on what I'm doing. They're great to work on when sitting chatting with the family.

This evening I'm working on the hexie bag. My goal for May is to complete this bag so I need to get a wriggle on. I think I will complete it in time.

It's back to work tomorrow after a good weekend sewing. This week I will be spending a lot of time on line as I have student tutorials, virtual interviews and an assessment board. There's never a dull moment when working from home. My students are enjoying their study days and in particular the online tutorials. They have all taken to keeping their video link turned off and last week I suggested to one group that they were still in their PJ's or even still in bed. They all turned their video on and I was right! I felt over dressed wearing my office clothes and make up. Lucy's catch phrase for lock down is 'don't let standards slip'. I think she's right and even when I haven't got any on line meetings I try to dress and behave as I would if I was in the office. My concession is to keep my slippers on.