This has been a good weekend for sewing. I decided earlier in the week to take Friday as an annual leave day. Having taken leave at Christmas and Easter and with some booked in July for Katy's wedding,which is not happening due to the virus, plus some days in August I still have 8 days which I must use before the end of August. By taking it on Friday I have a 4 day weekend because of the bank holiday tomorrow. What else can you do over a long weekend but sew. After all we can't go away for one of our walking weekends.

Yesterday morning I sat down with Lucy to start the quilt she's going to make as part of her 30 things she wants to do before she's 30. She has planned out what the blocks will be and has been collecting fabric to use. The quilt will involve a lot of applique but also machine and hand embroidery and pieced blocks. The back story for this quilt is her 30 years of life and part way through talking about the first block she said 'mom I've got to include the virus as it's become a major part of my 29th year!'. She put that idea to one side as she started on the first block which has her birth date and birth information plus the two soft cuddly rabbits she was given when she was one day old. She still has the yellow rabbit who is called yellowy but he is a grey colour having had most of his 'fur' loved off. 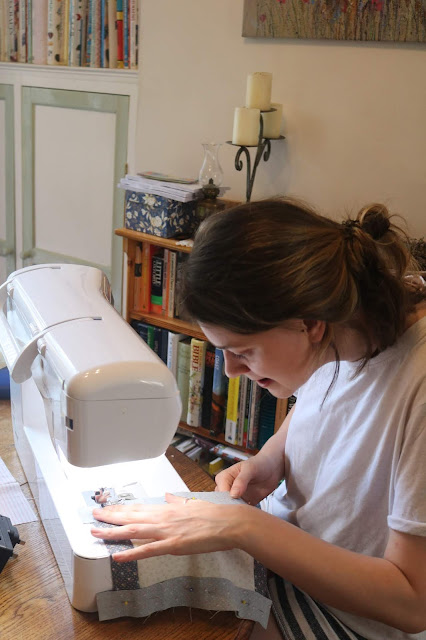 We decided to piece the block before any embroidery happened. Lucy last did any quilting in 2016 so ensuring a quarter inch seam needed concentration. Also Lucy was using my big Brother machine for the first time and so was getting used to the controls. Once the block was set up she set about doing the machine embroidery. She had already practised and we set up each line together to ensure everything was spelt correctly. Unpicking the machine embroidery is impossible. 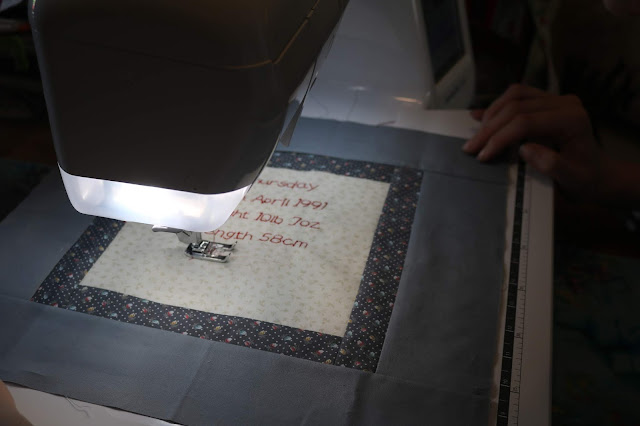 Although I've owned this machine since the end of 2016 I haven't used a lot of the 'extras' on it. The embroidery was one of these so I had a play to check out how it worked. It is so easy to set up since it gives all the information on the large screen. Now I'm a little annoyed with myself for not playing more with the machine and really discovering what it can do.

The final part of sewing with Lucy was to attach the two rabbit shapes. Lucy is going to hand embroider round them and so she went off to practise some stitches.

Whilst Lucy was using the machine I sat and finished stitching the binding down on Picasso's new quilt. there wasn't much to do and soon I was able to take a photo of the completed quilt. Scamp muscled his was in and enjoyed being the first to try it out. Casso didn't mind and later in the day he took a nap on it 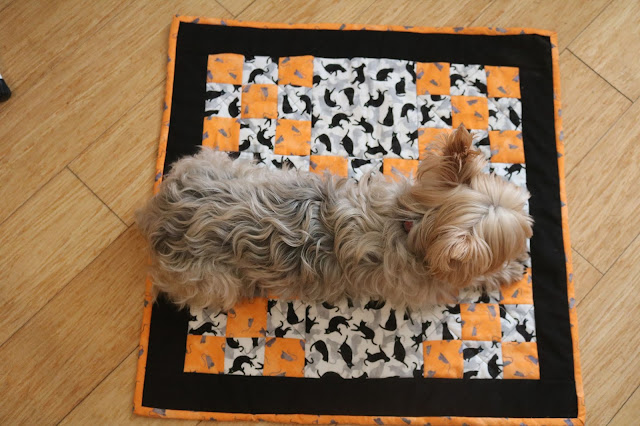 I've been working on two hand stitching projects and I really wanted to finish stitching Millicent. I spent  more time than I should have done yesterday curled up in a comfy chair with Scamp and my stitching. In between periods of stitching I did some housework and also made some granny squares, this was really to give my eyes a rest. I so nearly finished Millicent last evening but I still had small bits to do, so earlier today I sat and finished all the stitching. 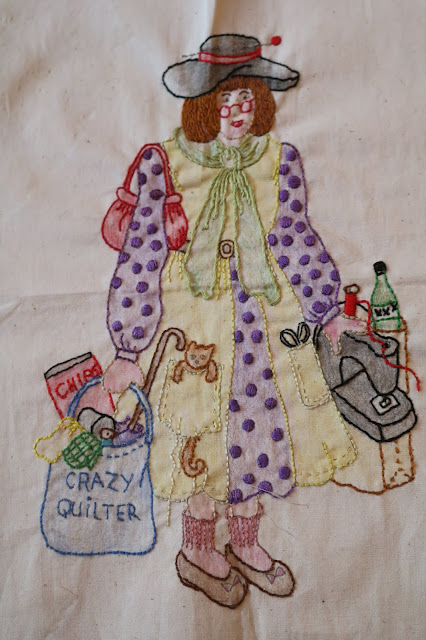 I like Millicent as she is a lady who knows her own mind. With this in mind I had a little discussion with her about her glasses as the pattern called for gold metallic thread. She doesn't look like a lady who would wear gold rimmed specs, she's so much more flamboyant and so we agreed on red frames. Now I have 2 bag ladies to finish and I've made the 12 of them. I have Charlotte who I've already worked on and Thelma who I haven't started. I decided to go with Charlotte. Here's how far I've got  so far. 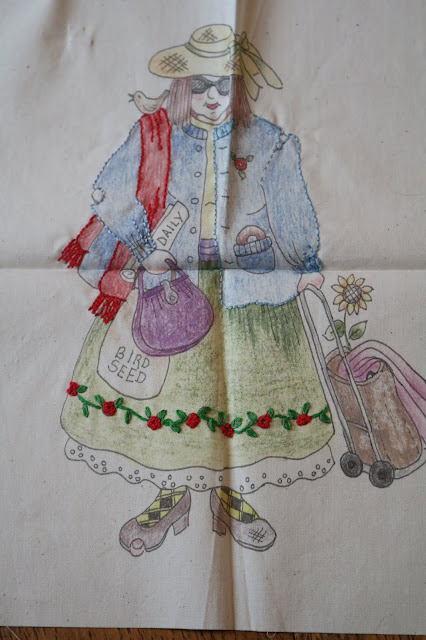 I'm linking this post with Kathy from Kathy's quilts for her Slow Sunday Stitching link up. I'm looking forward to finding out what everyone's been working on. Tomorrow is another sewing day but I haven't decided what to work on yet. I need to make some decisions before I go to bed as I don't want to waste any sewing time tomorrow.