This week has been total chaos on the local roads, especially the one that our house is on. The local authority decided to implement a Low traffic neighbourhood. Although it states on it's website it had informed the residents it hadn't. Planters have been put across roads to close them and chaos followed. If the residents didn't know the roads were changing how did they expect the deliver guys and the emergency services plus all other traffic to know. The road outside has been blocked many times now and people get on their car horns very quickly. At that point I'm out the door and telling people to stop the noise as it isn't our fault, we don't want it and by hitting their horns they are giving us all a headache. It's made worse by Transport for London who are responsible for the main roads also making big changes. I'm hoping it will be calmer this week as trying to teach from home over Teams became impossible at times last week.

By evenings last week I was either far too drained to sew or needed a long sewing session to calm my nerves and find my happy place. As a result the schedule I had made for myself went out the window and I did what felt right at the time. As a result I got on and did a lot of the quilting on the rainbow quilt. I started by sewing in the ditch and the added diagonal lines following the aubergine squares. I'm currently working on the outside borders. This is my one monthly goal project and I will have completed the quilting by the end of the month. Although not part of the goal I may even have the binding attached and stitched down. 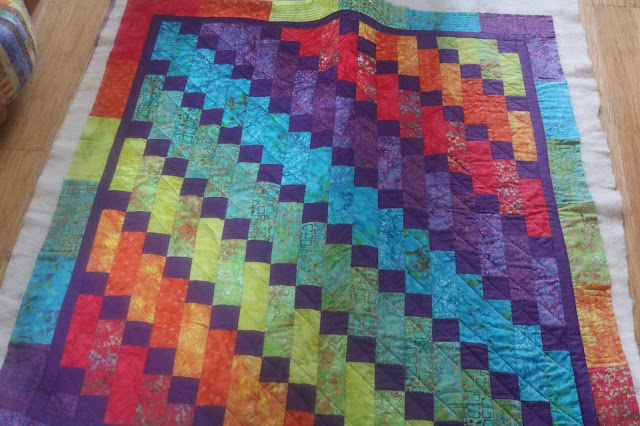 I've needed to do some hand stitching each day to calm myself but the millennium sampler isn't always calming due to the fractional stitches. I've finished the butterflies and this square is really pretty. 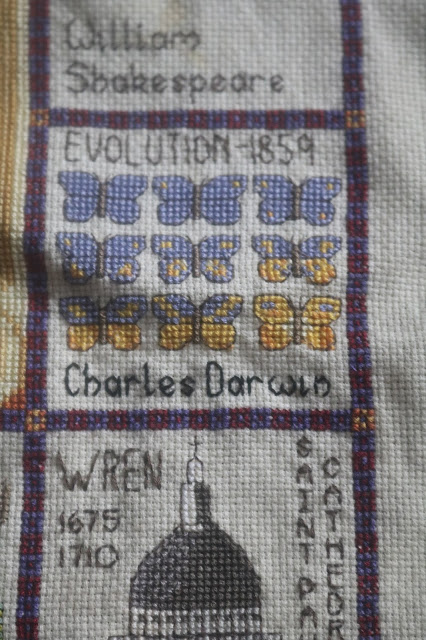 I've also started work on the happy and sad masks that represent William Shakespeare's plays. I think this square is my least favourite of all of them. Once I've finished this bit, which shouldn't take too long, I'll go back and finish the spitfire at the top. 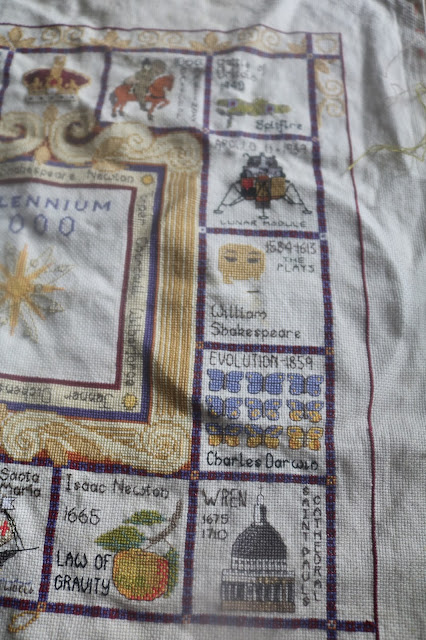 This sampler is definitely going to be finished before the end of the year which I'm really happy about. Note to self, next time I decide to get a new cross stitch pattern or kit I need to make sure it's not full of fractional stitches.

This weekend John, Lucy and I travelled to Suffolk to complete one of our walks. I'll post pictures next time.

I'm linking up with Kathy from Kathy's Quilt for her Slow Sunday Stitching I'll be popping over later for some stitching eye candy.