Walking by the rivers.

Back in June or early July I told you I was going to try and lose weight. It creeps on slowly so you don't really notice the extra pounds but once skirts and trousers start to feel tight it's time to do something about it. After all I'm not going to buy a larger size. John and I have always done a lot of walking and it is the perfect way to bring about a calorie deficit and so reduce weight. Plus the walking helps to tone the muscles, gets you out in the fresh air and makes you feel better.So far so good as I have now lost 7 pounds. Not a lot but the skirts are feeling comfortable again and I really enjoy the bird watching and flower spotting as we walk. Here follows a warning that this is a photo heavy post so grab a drink before reading further.

Last Thursday my car needed to have its annual service and the garage is a distance from home. Since neither of us wanted to use public transport we decided to plan a walk around the area near the garage. Here's a map of the walk taken from the Friends of the River Crane Environment web page. You can access it Here and find out more about the route

This walk takes in 3 rivers, The river Crane, the Duke of Northumberland's River and the River Thames. The whole route is 7 miles. The car goes to a garage in Twickenham to be serviced and from the garage we walked through the town to the station. We didn't go into the station but walked over the railway bridge and turned left to follow the river Crane that runs next to the railway line. At the entrance to the walk there was a fountain. It would have been lovely to walk through the water as it was very hot on Thursday. 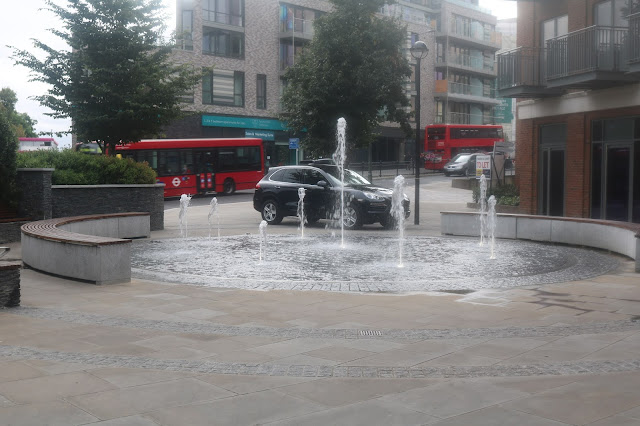 We left the road behind us and entered a lovely nature area with carved benches and lots of flowers. The train bench was nearest the station. 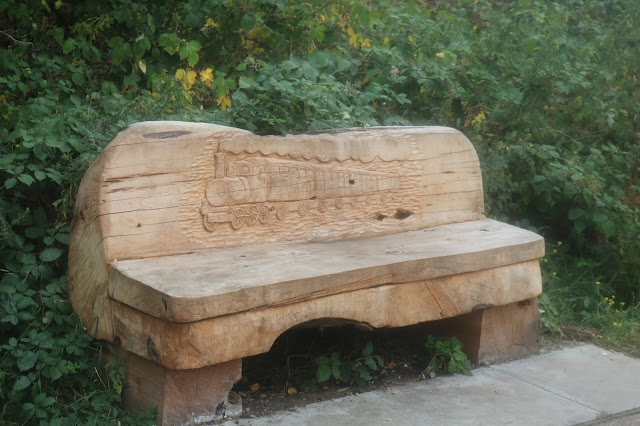 Sweet peas that had escaped from one of the gardens. 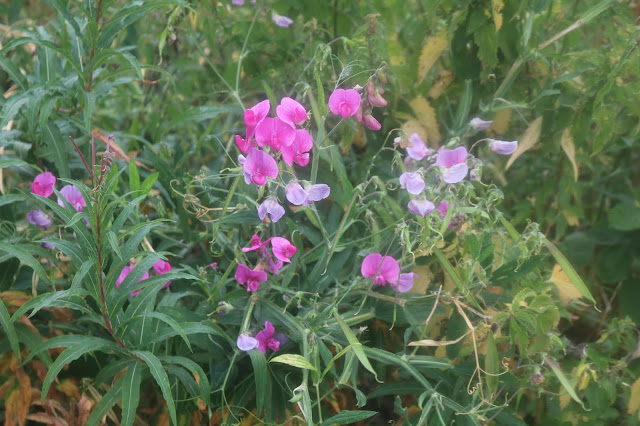 The bird bench. We saw lots of small birds on our walk, including robins, blue tits, sparrows and gold finches. 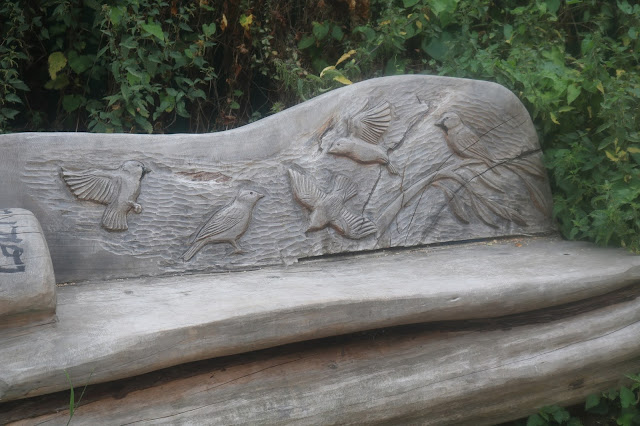 We didn't see a green woodpecker on this walk, except carved on the bench but we do regularly see two of them when we walk around the cemetery local to us. 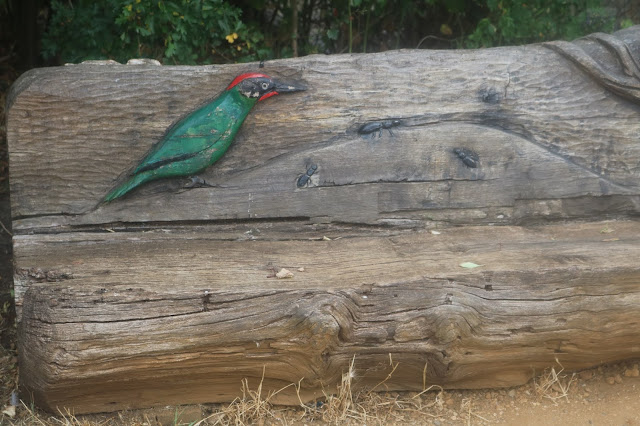 A little further on we found this sly fox having a rest on the bench. 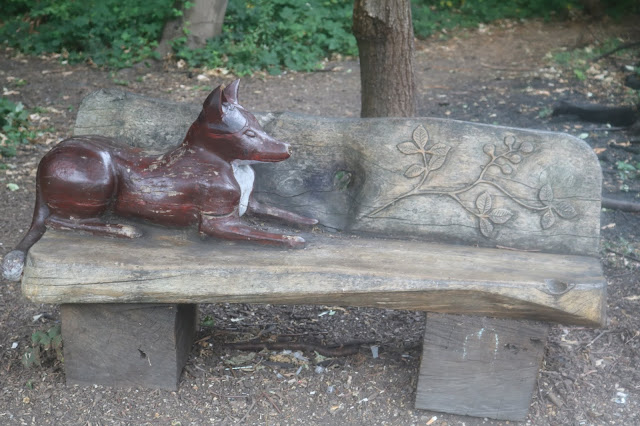 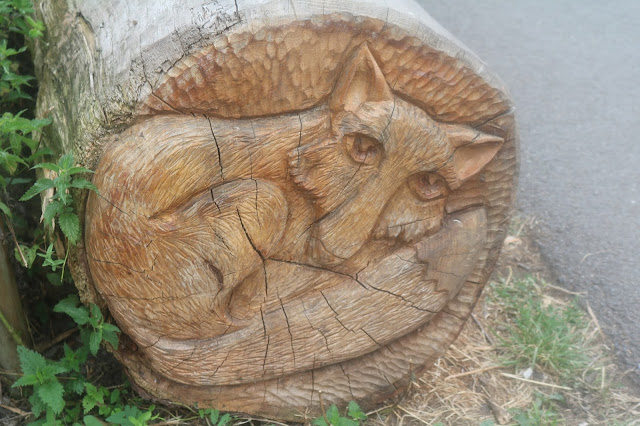 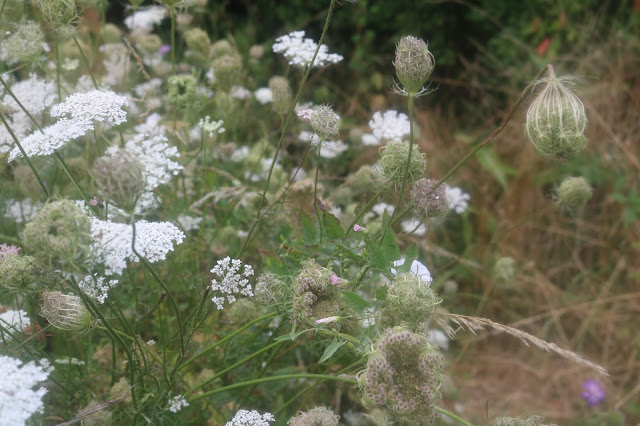 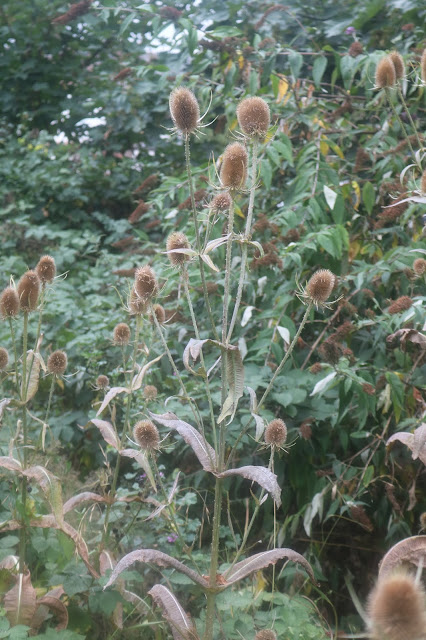 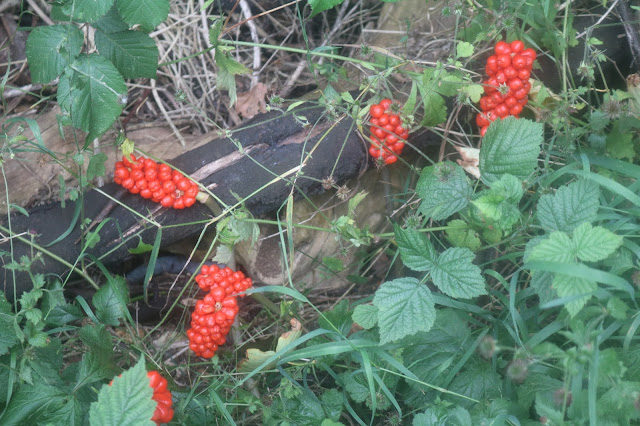 To this point we had been walking along the River Crane and now we turned right to follow the Duke of Northumberland's river. This is an artificial river that was built to provide water to mills in Isleworth. We joined this river part way along and followed it into Isleworth where it empties into the river Thames. There were several Elder trees heavy with berries. Great to make Elder berry wine. 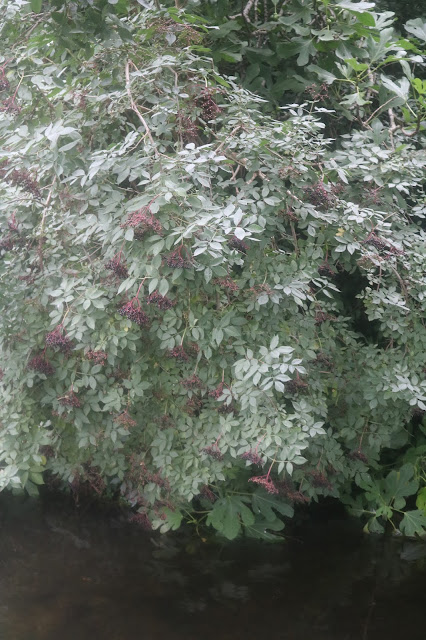 The large oak trees had a good supply of acorns which will keep the squirrels happy over the winter. 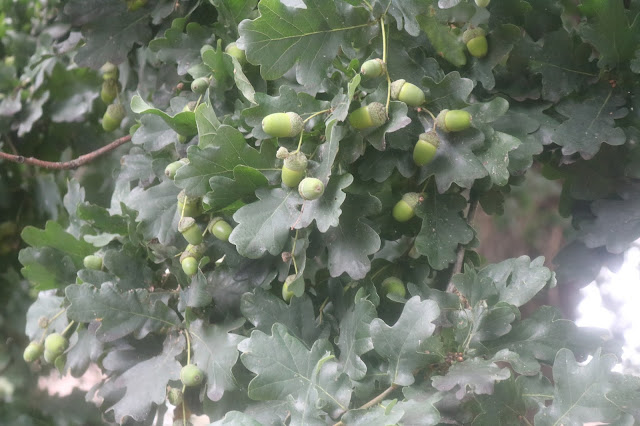 We passed Twickenham Stoop which is the home of Harlequins Rugby team and as we crossed the A 316 via the footbridge we had a good view of Twickenham stadium, the home of English rugby. The path later went along the back of the stadium. 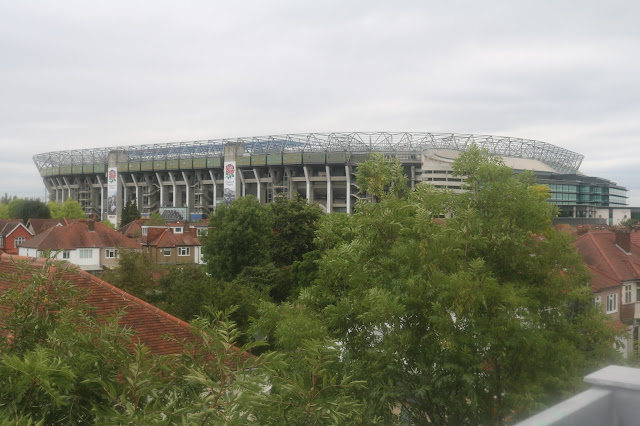 The A 316 is a main route into London from the M3 motorway. It was very quiet but at rush hours or holidays can be very crowded. 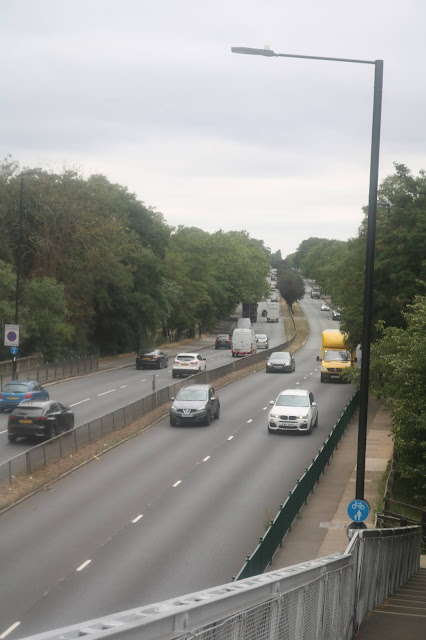 Having crossed the main road we rejoined the river. We saw several young herons along the way. 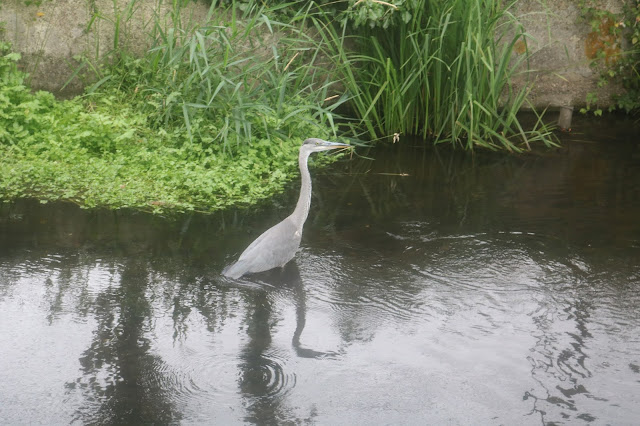 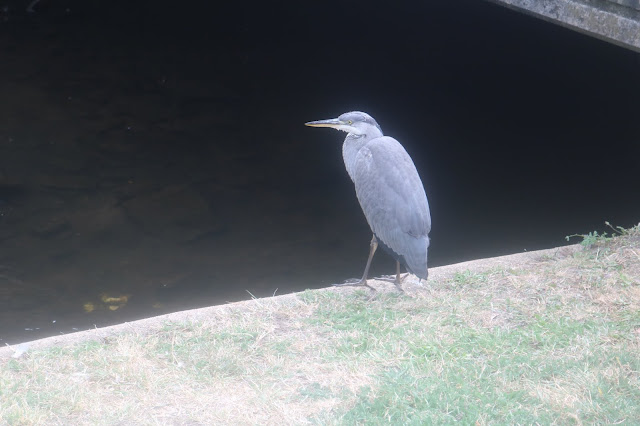 In Isleworth we followed the river until it met the Thames. We passed the old alms houses., which seemed to be having a makeover. The plaque tells you about the area including the alms houses. When John and I got married we had our reception in Little Warkworth which is what the house was known as. It was being used as part of the nurse training school at the time but with a sloping lawn down to a lake was the perfect reception venue. 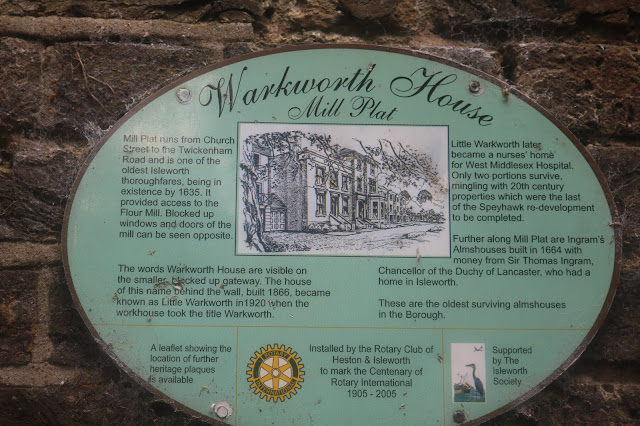 At the end of the river as it enters the Thames this plaque told us about the flour mill. 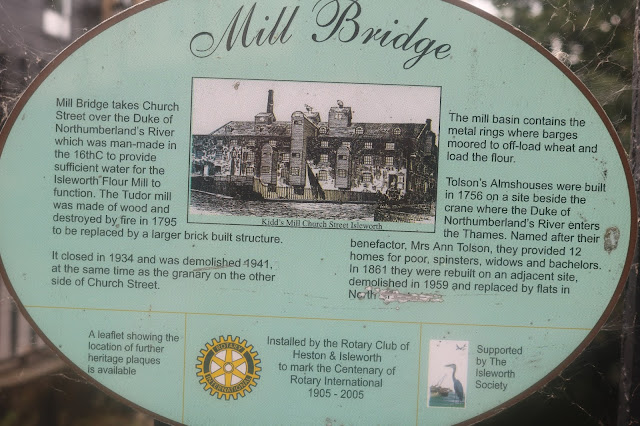 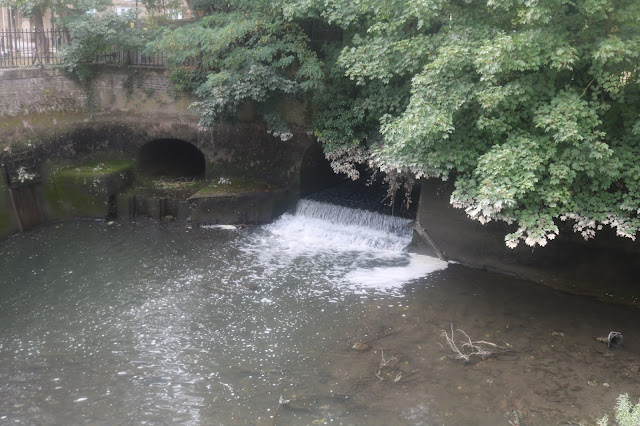 From here we followed the River Thames back to Twickenham. Low tide had recently happened and you can see how low it gets. The main flow of the Thames goes round the other side of Isleworth Ait, the island on the right of the picture. You can see people playing in the water 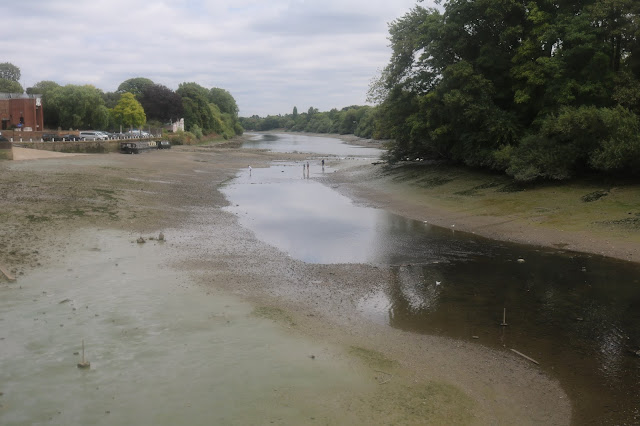 We walked passed the weir on the Thames. 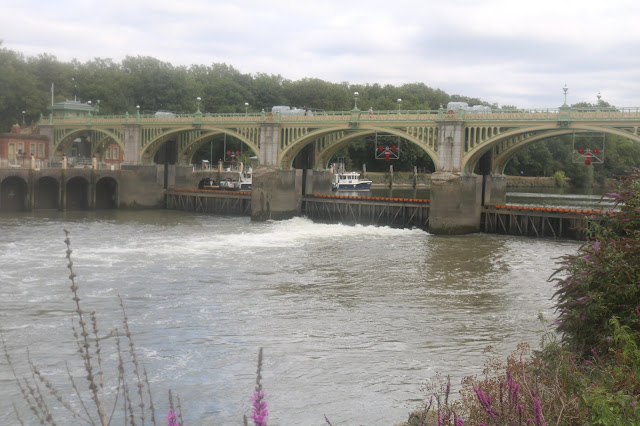 In Richmond we looked across the Thames and could see The Star and Garter at the top of the hill. This used to be The Royal Star and Garter Home built between 1921 and 1924 to provide accommodation and nursing facilities for 180 seriously injured servicemen. It has now been turned into luxury accommodation. 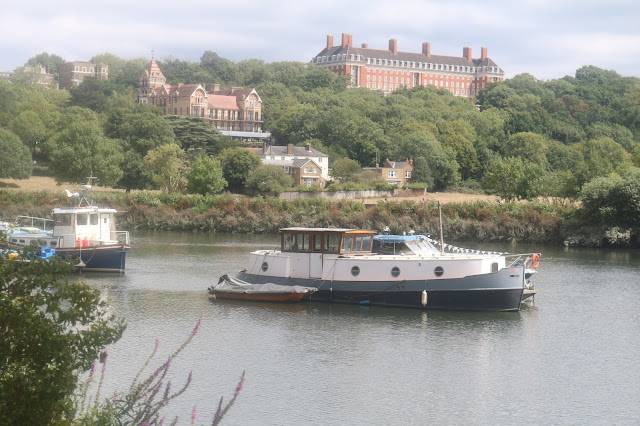 Back in Twickenham we had a cold drink and I bought greengages to make jam. Both John and I love greengage jam but you don't see it sold very often and also you don't see greengages on sale very much.
I'll have some sewing to share with you tomorrow as the fabric arrived for the Rainbow quilt.
Take care
Lyndsey
Posted by Lyndsey at 16:35